Abruptly Amy was a series of nine fanfics, eight of which ran during the fall of 2000. While Kara Wild wrote the initial pilot, she would be joined by C.E. Forman, John Berry, John Takis, Crazy Nutso, Mike Quinn, and Milo Minderbinder for the series.

Abruptly Amy (The Spinoff That Never Was)

In late summer/fall of 2000, Kara Wild showed the pilot of "Abruptly Amy" to C.E. Forman, who loved it immediately. As the pilot hinted that eight episodes had been filmed, but never aired, Wild and Forman discussed writing these episodes. Soon Wild began to recruit other well-known writers to the series. The writers of the first eight would be Kara Wild ("A.A. A.O.K." and "A Very Amy Christmas"), C.E. Forman ("Corona, Corona" and "Double in Paradise"), Crazy Nutso ("Windy City Walkabout"), Mike Quinn ("Raiding the Bar"), John Takis ("Hot Head, Cold Fetus"), and John Berry ("Disaster Strikes!"). The writers sought to write all of the episodes at once so that they could be "aired" once every week for eight weeks. However, delays on John Berry's part meant that there was a few-week gap between the first four and the second four. The last of the eight, "A Very Amy Christmas," premiered December 2000. 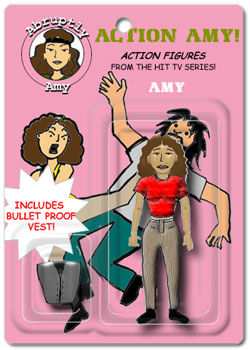 Retrieved from "https://dariawiki.org/w/index.php?title=Abruptly_Amy&oldid=11154"
Category:
Cookies help us deliver our services. By using our services, you agree to our use of cookies.