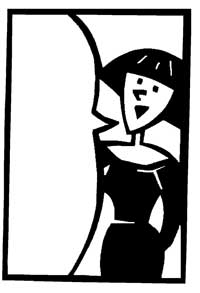 Anne D. Bernstein is an animation writer and illustrator. She has worked for multiple projects, including writing eight episodes of Daria and various spinoff media.

Bernstein attended South Side High School and went to the School of Visual Arts in New York, NY from 1979 to 1983, where she graduated with a Bachelor's Degree in Fine Arts. She started as a contributing editor to Paper magazine between 1984 and 1988 and as a sketch writer for Chucklehead before becoming a senior editor at Nickelodeon magazine, a magazine targeted to the child demographic of the network. In addition to supervising writers for the magazine, she also served as an editor for the comics section.

Between 1996 and the present she has worked as a writer or writer supervisor on several animated television programs. She was also a contributing editor at National Lampoon.

For MTV, Bernstein was Head Writer of MTV Animation Development, in charge of supervising freelance writers and writing show bibles and scripts. While never a head writer for Daria (there was no such title), she would write "The Daria Diaries", the first of two books based on the Daria TV series, and was responsible for the bulk of MTV's Daria website material. She ended up creating the entire extended Lane family for "Diaries" and later the show, as well as being responsible for Upchuck.

She remains in New York City as a self-employed writer and is currently blogging at Roadside America.

Jake Morgendorffer is one of her favourite characters because of his random emotional outbursts. [1]