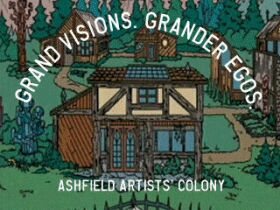 Ashfield, "A Community for the Arts," is an artists' colony in an out-of-the-way college town where Jane Lane spends the summer between her junior and senior years of high school (per Is It Fall Yet?).

The colony is run by an old commune-mate of Amanda Lane; despite the connection, however, Jane submitted a portfolio like other applicants and was accepted. All of the other participants seem to be older; unfortunately for Jane, most of them are also pretty pretentious. The only one whom she managed to bond with was Alison, who ultimately proved to be a rather subpar friend. The colony featured another pretentious artist, Daniel Dotson, as a lecturer during the summer Jane attended.

When Mystik Spiral had a gig near Ashfield, Trent took Daria with him to see Jane, allowing the two to reconcile after the events of The Kiss. Though Jane disliked her experience at Ashfield, especially after her falling-out with Alison, she passed on their offer to take her back to Lawndale two weeks early, citing "some kind of dumb-ass notion about seeing this through." Shortly after returning she went on to her senior year at Lawndale High.

Ashfield generally turns up in fanfiction based on "Is It Fall Yet?," though there are exceptions.