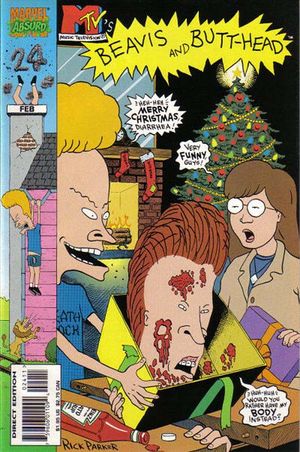 Marvel Comics' Beavis and Butt-head ran for 28 issues between 1994 and 1996, as a spin-off from the show. (Due to the variances of the comic industry, "holiday" issues have cover dates of two months after the holiday used in the issue occurs.) Every issue was drawn by Rick Parker. It featured several stories per issue, as well as gag features such as "activity pages", a fan mail page answered by the lads (and twice by Daria Morgendorffer), spoof help guides by supporting characters, and Beavis and Butt-head reviewing Marvel comics in the same way they reviewed music videos on the show. Marvel UK reprinted the comic with new editorial material and covers.

Writers included Sam Johnson and Chris Marcil, who wrote for both the B&B cartoon and later for Daria. Glenn Eichler is credited as a consultant.

Daria turned up far more frequently in the comics then she did in the show, something that was true of other supporting characters like Earl and Mistress Cora. For Daria fans, these comics (as well as being funny in their own right) are a fascinating look at Daria's early development: her personality and actions differ under different writers, as it would in the Beavis and Butt-head show itself, as Daria's more familiar personality was not yet set in stone. In the earliest issues, she's a fact-spewing, humourless know-it-all; in most issues, she has a sardonic sense of humour but finds herself undone in the face of Beavis and Butt-head.

Some moments are bizarre to our eyes now - never mind that she volunteers for things, Daria is thrice seen at parties and one of them is at her house. Others can flesh out our understanding of the character, such as moments where Daria is genuinely angered by Beavis and Butt-head insulting her looks, and background implications that she's being bullied. Daria also got the chance to interact with other Beavis and Butt-head characters that she never did on the show, such as Stewart Stevenson (she disliked him). We can also see early fan views of Daria via the letter pages - and boy, did a lot of people ship her with Beavis or Butt-head...

A number of issues do show the sardonic personality, use of sarcastic put-downs, and passive-aggressive activity of Daria itself, particularly when Marcil and Johnson were writing. During the comic's run, Daria began early production and this version of the character was starting to take shape.

Daria stuck with a variation of her outfit from her earliest episodes, even though she'd switched to a different one on the show by the time the comic ran.

The issues listed here are the ones where Daria had a speaking part. Only strips with those parts - or which are linked to them - are summarised. In three cases, Daria only appears in the comic's features.