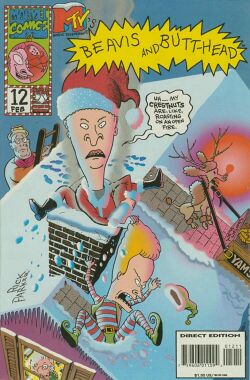 Beavis and Butt-head #12 was the February 1995 issue (with a street date around Christmas 1994) of the Beavis and Butt-head comic. All strips and features were drawn by Rick Parker (art and lettering) and written by Sam Johnson & Chris Marcil, with colours by Rob Camacho; Glenn Eichler was consultant.

Mr. Van Driessen announces it's time for the class Christmas party, which Beavis and Butt-head mistake for a surprise exam (Beavis consoles Butt-head by saying he wouldn't have studied anyway). Before they get to the holiday grab bag, however, Van Driessen sings the class a song he wrote in honour of the Sun that all winter holidays are based around. The lads scream in horror, Butt-head remarking the song is worse than crap because you can flush crap away (Beavis is surprised to hear this). Next up, Van Driessen asks who wants to help put up the mistletoe to get the class in a festive mood:

The lads decide to help with the mistletoe so they can score, though Beavis feels this is uncomfortably like a job when the ladder comes out. After a lot of accidents and managing to hit each other repeatedly, they get the mistletoe up and announce "come to Butt-head"... causing every girl in the class (especially Daria) to flee in the opposite direction.

Van Driessen puts the mistletoe on hold and gets out the grab bag with its presents, to Beavis' annoyance; Butt-head informs him scoring is a present, a gift that keeps on giving ("I thought that was herpes."). The duo take out presents first, and are horrified to find sharpened pencils and a book. (Beavis remarks his mother used to give him books as a punishment) They boast everyone will feel sorry they gave such crap presents when they see the gifts they put in the bag:

Earl gets Beavis' gift, and remarks the green candy tastes like snot... for a very obvious reason. The enraged Earl threatens to beat down the kids, with Van Driessen calling out that Earl can't do that on school grounds as "it's against the rules!". The teacher announces he'll have to give the two an F for being insensitive to the other students by giving out such horrible presents, but won't if they... no, Beavis, not get beaten up by Earl, but deliver an oral report on the meaning of Christmas. Horrified, Beavis asks if they can go with the ass-kicking instead.

Putting the X in XmasEdit

Back at home, Beavis wonders if they were supposed to be doing something for school; Butt-head remembers they need to find out what the meaning of Christmas is, but luckily the TV has a MacGuyver Holiday Special. Even better, one where he rescues a baby with an exploding nappy! "WHOA!" They enjoy this, but realise MacGuyver never said what the meaning of Christmas was. "This assignment is harder than, like, it looks or whatever."

In a rare brainwave, Butt-head realises Daria will know the answer and they should ask her. Beavis agrees: Daria has tons of useless crap in her head!

Beavis proclaims this will be easy! In the very next panel, they've managed to tie themselves up with popcorn strings and Butt-Head gives in and says they'll rescue the baby instead.

They decide to make Stewart tell them the answer, and come into his house. Stewart offers them to spend Christmas with him and his family and they'll learn, but Beavis is having none of that trickery! Stewart starts talking or he starts smashing presents! Unfortunately, the present he chose was a set of weights and he knocks himself out...

Beavis is visited by a frog in chains, the ghost of the frog he killed ("Uh... that was Butt-head's idea"), and told three ghosts will visit him. Van Driessen, Ghost of Christmas Past, shows him the wonderous Christmas of his past: fighting with Butt-head over a He-Man toy and breaking it, while Beavis happily remembers when He-Man was on the telly. Coach Buzzcut is Christmas Present, come to show him the Christmas joys he's missing out on: Butt-head thinking Beavis is dead and proclaiming "Christmas rules!!!" before ordering Stewart to roll the corpse over so he can loot the back pockets. Van Driessen, Christmas Future ("I'm pulling double shift tonight"), shows what will happen if Beavis doesn't change his ways: being an old dude and acting exactly the same as in the Past. Beavis is horrified at the sight of being old and wakes up, screaming to change the channel.

The two head off the MaxiMart to get some nachos to calm Beavis down, and when Finley the store owner gives a big speech about the meaning of Christmas and how it's about what's in your heart ("Cool! Huh huh! BLOOD!"), the boys continue to demand nachos and he gives them some free ones in the spirit of Christmas. "Dude, I think we found the true meaning of Christmas... FREE STUFF!" "YEAH! And BABIES FULL OF GAS!"

Beavis and Butt-head had a "sliding timescale" approach to continuity: they remain fifteen forever. Daria had chronological progression though. So while it's fine for Beavis & Butt-head to have had this Christmas story and then some more later, and in each case coming after multiple other stories (some with explicit seasons), it causes chronological issues for Daria.

The easiest way around this is to assume Beavis and Butt-head is out of chronological order: this story takes place before most of her other stories with them, even though it was produced after some.

Handily, this comic takes place before school finishes - this means it can take place in the same December as "It's a Miserable Life", which takes place on Christmas Eve & Day.