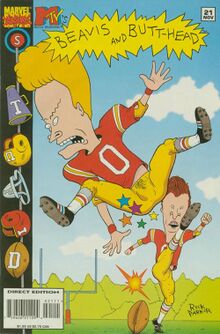 Beavis and Butt-head #21 was the September 1995 issue of the Beavis and Butt-head comic. The strip was written by Sam Johnson and Chris Marcil, with Alan Kupperberg as guest penciller and Rick Parker doing inks art and lettering), with colours by Rob Camacho; Glenn Eichler was consultant.

It's football season and big game time at Highland High, causing Beavis to daydream about being a quarterback and a cheerleader wanting to do it it with him. Coach Buzzcut wakes him up, bellowing that FOOTBALL IS LIKE WAR in that you can't have victory without total support on the home front... causing him to have Vietnam War flashbacks to being surrounded by angry hippies protesting and Mr. Van Driessen handing him flowers & saying "just remember, the Vietcong never have a nice day"... causing him to try and kill Van Driessen, who is really there and trying to hand him marker pens. Buzzcut apologises for the flashback and Van Driessen limps up, claiming that's no problem ("...fascist").

Back on topic again, Buzzcut is launching Operation Restore Spirit, and hands out sheets of paper. A confused Butt-head notes "my thing doesn't have any writing on it", causing Beavis to state that his does ("It says I'm With Stupid!") but most of it rubbed off: 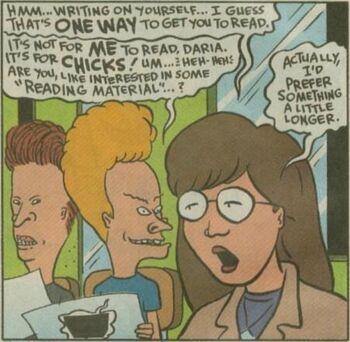 Buzzcut informs everyone they're to create their own school spirit posters for the wall - his says to "EVISCERATE YOUR OPPONENT! (Cut their guts out)" - and soon the walls are filled, Daria watching on with disinterest and the coach bellowing his joy. That's until he sees Beavis and Butt-head's contributions: "School Sucks" and a cartoon of a dog driving a car. Enraged by their lack of spirit, Buzzcut drags them off to Pep Squad practice to show them what-for, with Butt-head berating Beavis "I told you not to draw that dog on your poster ... at least mine says "school" on it, dumbass". However, the Pep Squad turns out to have girls in it who do splits and jump around and stuff, and the lads are told they're now drafted into the Squad - Butt-head thanks Buzzcut for sending them there, and Beavis now feels a lot of school spirit "and it's kinda uncomfortable and stuff".

The poor captain, Sandy, is an incredibly perky (and big breasted) cheerleader who tries to find something the lads can actually do, but they fail at the splits (because her doing them has given them stiffies) and cartwheels, and only just pull off yells ("AAAAAAAGHHKKK!"). Sandy stays perky anyway. Meanwhile, Buzzcut goes into a fury when his players Ram and Buck tell him they're resigning from the team as it's interfering with their studies ("what's more important - quantum physics or football?"), and boots them off before they can resign, calling them a disgrace to America. "Try applying the principles of quantum physics to the real world, gentlemen - IT CAN'T BE DONE!!"

Later, the pep rally takes place, Beavis getting excited about being "FIRED UP! FIRED UP!". The players turn up to elaborate cheers ("Uhh... like, yay or something..."), while Buzzcut tells the angry crowd that some people thought schoolwork was more important than winning. However, it all goes wrong when most of the pep squad do a human tower and fall over - Beavis grabs Sandy before she hits the floor, but to her horror something is poking into her. Beavis flees with her, players and squad members pursuing him ("She's mine! All mine! Finders keepers!") before Buzzcut intervenes, booting the lads off the pep squad for being perverts and drafting them into the football team ("Huh huh. Football") because of the speed Beavis just showed.

Since the game's tonight, Buzzcut has to very quickly get them up to speed ("Huh huh. He said he's gonna get you up, Beavis") but their uniforms & helmets barely fit, they don't understand the exercises (on the tire run, they sit down in the tires, noting they thought it'd be harder than this), kick practice dummies in the nads, and prove unable to master any plays. Buzzcut says they're the worst players he's ever seen and refuses to let them leave his side during the game in case they mess things up. As a result, they have to watch the Highland v. Tech game, Butt-head explaining how football works to Beavis: "you're supposed to kick the dude with the ball's ass, unless you have the ball and then you're supposed to not get your ass kicked, then you're supposed to go to the zone or something, and then like spike the ball and stuff, and, like, do some cheerleaders..."

Highland gets steamrollered and has lost most of its team by the end of the game (one player has his right arm off and thanks God he's left handed) with only six seconds to score the last point. Buzzcut, desperate, calls in Beavis to win the game. In a stunning display, Beavis runs the length of the field, dodging every Tech player (and kicking one in the nads), while Butt-head and Sandy stare in awe...

Until he gets to the end and spikes the ball, forgetting to do the touchdown first. That loses the game and now everyone from Highland is forming a mob to rip the lads to pieces. They take refuge at the top of a goalpost, still surrounded by flaming torches into the night. Butt-head reassures Beavis they won't be there long, just "until baseball starts again"...