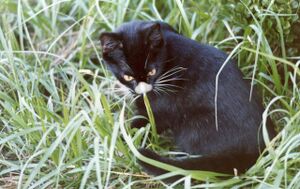 In A Home at Summer’s End (chronologically, Bump's first appearance), it is revealed that Bump was a homeless animal that wandered the streets of Boston since she was a kitten. It was also revealed that Bump's family consisted of her mother, two sisters and a brother, all of whom are now deceased. Bump witnessed the death of her sister Sissy, a tortoise-shell cat who had the same markings as their mother, when she was (presumably) killed by a red car at a student parking garage. Amy Barksdale drives a red car, as revealed in "I Don't," as does Helen Morgendorffer (her SUV), but it is unknown if either one was responsible for the death of Bump's sister. In the story, Bumpmas, it was revealed that she also had a brother. He also wrote a brief "Red Dwarf" crossover that made a clone of Bump (created by Karen and Derek after the death of the original Bump) the start of the lineage that led to Lister's cat Frankenstein. This clone, named 'Night' by Daria, was not spayed and allowed to have litters of kittens.

Bump made two appearances in the Judith Strikes/Worldburner crossovers, set in FiC continuity: in the first, Bump led other cats in defeating the world-hopping supervillain Judith's schemes. In the second, a more powerful Judith slaughtered Bump in revenge before destroying the rest of the FiC universe.

Brother Grimace has mentioned on several occasions that Bump is his favorite Falling Into College character, and has used the character in several fanfics; the darkest fic to feature the character was an AU post-apocalyptic fic entitled "Pet Food." He also used Bump as the Red Paws Force Power Ranger in his Fandemonium entries, and was the one that issued the challenge that inspired Richard Lobinske to write a FIC story, "I Meant to Do That," that focuses on Bump and her adventures with Daria & company over the course of a Sunday. He has also written two crossover fics about Bump: a Stargate SG-1-themed piece titled Bump, The System Lord, and Piano Practice, which is based on the Walt Disney film High School Musical 2. In Balance, Brother Grimace wrote that Sissy was saved immediately after the accident in "A Home at Summer's End" and, via a complicated process, reunited with Bump after "Bumpmas".

In the Legion of Lawndale Heroes mini, Beta Testing, alternate versions of Bump and her sister Sissy were rescued by the Ringbearer Archangel and brought to Legion Tower to be adopted by Daria. The LLH mini Cats' Night Out indicated that the pair could converse with other animals, hinting at them being given limited Defender Ring gifts.