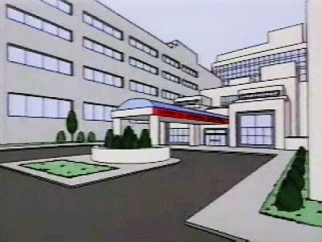 Cedars of Lawndale is a fictional hospital in Lawndale where Jake Morgendorffer was a patient after his heart attack in the episode, "Jake of Hearts." It is probably the hospital where Daria Morgendorffer stayed in "Ill", and the hospital where Jane Lane volunteered to teach arts and crafts in the children's ward (and was banned from said ward after helping them draw a scalping) in "The Old and the Beautiful".

The name is a play off of Cedars-Sinai Hospital in California with the implication that the Lawndale location is associated with the California location.

This hospital has become the de facto medical facility used in nearly all Daria fanfiction taking place in Lawndale. The number of times it has been mentioned essentially prohibits offering a comprehensive listing of fanfics using it as a setting.

Retrieved from "https://dariawiki.org/w/index.php?title=Cedars_of_Lawndale&oldid=15451"
Category:
Cookies help us deliver our services. By using our services, you agree to our use of cookies.