Cindy is a recurring backgrounder at Lawndale High. She is visually based on Daria producer Cindy Brolsma, who she's named for (and in several fanfics has been given the surname "Brolsma" as well).

She wears glasses, trapezoidal in shape and mounted in thick dark frames. She usually looks pleasant and cheerful. 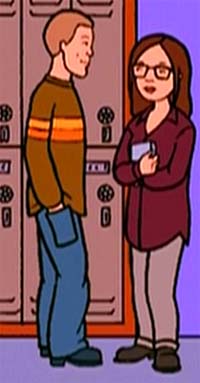 An extremely peculiar thing about Cindy is that she was in the same year as Quinn Morgendorffer but somehow graduated in "Is It College Yet?" with Daria's year. We're not sure how she managed this: she was still in Quinn's class in S5's "Lucky Strike" and is unlikely to have been moved up a year that fast...

Appearances by Cindy show she is a big school sports fan, appearing to watch various Lawndale Lions games (Kevin's fumble in "The F Word" had her grabbing her head, aghast) and also the Lawndale High Track Team. She seems to be a fan of Z93's Mental in the Morning as well, cheering them on in "Jake of Hearts". She follows the school fashion trends, donning all-black like Quinn in "Quinn the Brain" and wearing the school colours in "The Lost Girls", and went to the dance party in "Daria Dance Party" (where she was seen dancing with a boy she'd met). She was invited to the Fashion Club's 'Fashion Don't's' party and came in full costume in "Monster".

Cindy likes to visit The Zon too, in "Ill" and "Pierce Me"; both times are when Mystik Spiral was performing, so she might be a fan. She also volunteered in the same soup kitchen as Jodie Landon in "Is It Fall Yet?". 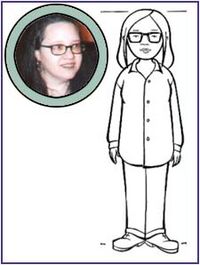 Despite her conformity and mainstream interests, Cindy is seen multiple times with background goth girl "Kristen": "The Lost Girls" (hanging), "Daria Dance Party" (at the dance together), "Daria!" (sitting together), "I Loathe a Parade" (at the parade). The two appear to be friends. Kristen also graduated eerily early...

We don't know her academic ability, though she looked disappointed with her marks from temp-teacher Daria in "Lucky Strike".

In "Dye! Dye! My Darling", before Jane learns of The Kiss, Cindy can be seen talking to a boy (who may be Les); the poses suggest he's either chatting her up or they're already going out.

Cindy didn't appear in any fanfics until December 2010 (when this page was created on the old wiki), when she debuted as a computer coding nerd in cfardell_Brenorenz29's Quinn's Code story. (cfardell would continue using her in the Post-Canon "A Question of Cindy", explaining she graduated early by doing advanced classes outside of Lawndale High, and First Day of Summer.) In spring 2011, she began appearing as a significant secondary character in God Save The Esteem as an accidental 'queen bee' at Lawndale High, and in the Lawndale Fighting Championship series as an enthusiastic rookie wrestler on her way up. All three of these have different takes on who Cindy 'is', working off the same list of background appearances.

While her heyday for fic appearances was in the early 2010s, she'll still pop up now and then.

She appears in WellTemperedClavier's The Background Blues as a participant in the geek IRC server secretly run by Josh. Her online moniker is "Trapezoid Glasses", in reference to her spectacles.

Retrieved from "https://dariawiki.org/w/index.php?title=Cindy_(backgrounder)&oldid=29363"
Categories:
Cookies help us deliver our services. By using our services, you agree to our use of cookies.