From DariaWiki
Revision as of 15:25, 6 April 2018 by Charles RB (talk | contribs) (Created page with "thumb|200px| '''Daniel Dotson''' is an artist and art instructor at Ashfield, where Jane spends the summer during the events of Is It Fall Y...")
(diff) ← Older revision | Latest revision (diff) | Newer revision → (diff)
Jump to navigation Jump to search 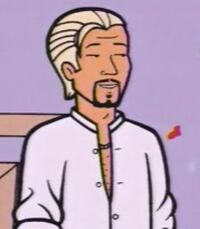 Daniel Dotson is an artist and art instructor at Ashfield, where Jane spends the summer during the events of Is It Fall Yet?.

Daniel is considered a famous modern artist. Most of the young artists in Ashfield are in awe of him, despite his ego, questionable talent, and tendency to talk a load of smarmy bull to sound intelligent & insightful. Dotson has been creating art since at least 1991, which is when he created Paper Plate Genocide (eight paper plates stuck on spears) which, according to him, was considered by art critics as a brilliant work.

He hits on - and goes through - every woman in the colony that he can. Everyone knows that he's doing it, and laugh it off as "genius has its prerogative". 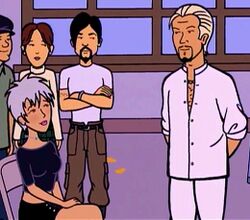 Jane's opinions of him are less than flattering, as are those of Alison, another student at the art colony. However, at the end of the episode it is revealed that Alison has started a relationship with Daniel as a means to getting her art into circulation, to Jane's chagrin.

He was voiced by Dave Grohl, a musician known for his work as a member of Nirvana and Foo Fighters. MTV's old "Guestward Ho!" flipbook reveals "While looking over his lines as the opportunistic artist in "Is It Fall Yet?," Foo Fighters' David Grohl exclaimed, "God, I'm such a sleaze!" We think he was talking about the character."

Retrieved from "https://dariawiki.org/w/index.php?title=Daniel_Dotson&oldid=26247"
Category:
Cookies help us deliver our services. By using our services, you agree to our use of cookies.