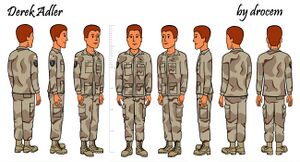 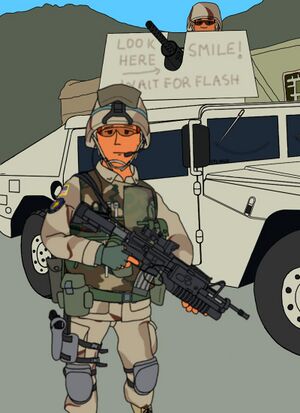 Derek Adler from "Falling Into College" during his deployment to Afghanistan, illustrated by Drocem

Karen Myerson's boyfriend in Richard Lobinske's series, Falling Into College. He's a molecular biology major and Massachusetts native who's funding his college expenses through National Guard service. In "A Star for the Window", his unit was activated and sent to Afghanistan for a one-year deployment. While there, he was stationed at Camp Raptor.

During the events chronicled in "Broken Star", Derek (who has been promoted to Corporal) was seriously wounded during an insurgent attack in Afganistan and has been sent back to the United States because of his injuries. It was also revealed that Derek and Karen Myerson were secretly married before his departure in "A Star for the Window".

In "Arrivals and Returns", it was revealed that Derek had been promoted to Sargeant, and had been awarded the Silver Star for his actions in Afganistan.

In post-series continuity, Derek comleted his studies at Raft in December, 2003 while Karen was in Veterinarian School. He want on to omplete a Masters and after Karen accepted a position as an equine veterinarian in Florida, found a job as a Microbiologist at the University of Florida. Karen gave birth to their daughter Eve on May 25, 2009.