The episode starts as Jane is at the Zoo with Trent, observing a tiger for secret reasons.

The next day, or a few days later, Daria accidentally walks in on Tom and Jane kissing. After joking off Daria's intrusion, Jane reveals her surprise: a painting of herself with alternating black and blond stripes in her hair, against a jungle background. She tells Daria that this will be her new look, and wants Daria's help to achieve it. "The lady or the tiger," Jane says. "Now you won't have to choose." 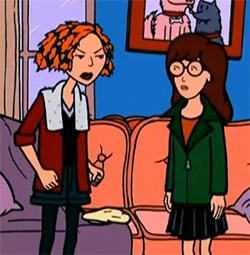 Retrieved from "https://dariawiki.org/w/index.php?title=Dye!_Dye!_My_Darling&oldid=29380"
Categories:
Cookies help us deliver our services. By using our services, you agree to our use of cookies.