From DariaWiki
Revision as of 01:26, 13 December 2020 by Charles RB II (talk | contribs) (Created page with "thumb|300px| '''Ethan Yeager in Lawndale''' is an ongoing alternate universe fanfic series by Shiva that was inspired by a lack of Homose...")
(diff) ← Older revision | Latest revision (diff) | Newer revision → (diff)
Jump to navigation Jump to search 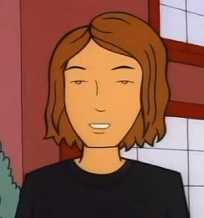 Ethan Yeager in Lawndale is an ongoing alternate universe fanfic series by Shiva that was inspired by a lack of gay male stories in Daria fandom.

The change involves the aftermath of the episode "That Was Then, This is Dumb" in which the Yeagers are convinced by Jake Morgendorffer to move to Lawndale to expand their hemp business, and Ethan Yeager comes out to Quinn and Daria the day of the move. Quinn accidentally outs him, setting events into motion that change the dynamic of Lawndale High in a big way. (The Fashion Club is an early casualty, replaced by the Quinn-led Style Girl's Club, and Mack turns out to be closeted gay)

Ethan finds himself the person other students come to in order to discuss gay rights and identity issues, even though he wishes that people would see past that and get to know the person. He's revealed to have a real flare for drawing, though outclassed by Jane Lane; builds up a social circle; and starts to date Josh Decker, the first person to talk to him at school and who becomes more friendly under Ethan's wing. Ethan also gains an adopted brother, Rex Attor, a Lawndale Lion and former self-hating homophobe who, after coming out himself, has to seek refuge with the Yeagers.

The Yeagers real names are revealed to be Chuck (Coyote) and Sarah (Willow) - and their extended family is revealed to include, on Willow's side, the once-illustrious Haywoods and the Sloanes. While Tom and Ethan bond, Willow and Kay Sloane have not spoken in decades after Kay failed to follow through on her promise to support Willow's relationship with Coyote.

Retrieved from "https://dariawiki.org/w/index.php?title=Ethan_Yeager_in_Lawndale&oldid=28180"
Categories:
Cookies help us deliver our services. By using our services, you agree to our use of cookies.