"Gifted" was written by Peggy Nicoll.

Jodie and Daria are invited to visit Grove Hills, an elite school for academically gifted students. Daria isn't impressed, but goes along with it when Helen bribes her. Quinn is informed that she'll be staying behind for the weekend; visions of staying home alone (and partying) are shattered when Helen works out a deal with Sandi's mother, Linda, to allow Quinn to stay with them while they're gone.

While Daria and her parents give Jodie a ride to Grove Hills (her parents will meet them there and drive her home), Quinn slowly and methodically wears out her welcome with all three Fashion Club members: Sandi, when her younger brothers fawn all over Quinn; Tiffany, when Quinn blows up at her for constantly asking if she's "too fat"; and Stacy, where Quinn actually runs off after getting creeped out by Stacy's way-too-needy overtures of friendship. (The final straw is when Stacy dresses up like her...) She ends up at the Lane house and pleads with Jane to let her stay the night. Jane lets her stay when she realizes that Quinn is terrified to be home alone, but almost immediately regrets it when her shallow and self-centered attitude starts driving her crazy.

At Grove Hills, Helen and Jake meet Jodie's parents, Andrew and Michele, but their association is strained and awkward as Helen's every overture to Michelle is taken as a racial comment, Jake is easily led by Andrew, Andrew blames "welfare cheats" for why American companies are using child labour (and Jake is easily led), and the Landons show a few family strains lurking under their happy facade. (With barely any prompting, Michelle lets slip that Evan was unplanned but she's okay with taking the time off work...)

Daria and Jodie quickly hit it off with Grove Hills students Graham, Lara, and Cassidy, who turn out to be just as smart and sarcastic (and annoyed by perky Grove Hills recruiter Marina) as Daria is. Unfortunately, it turns out they're even more stuck-up and obnoxious than the students at Lawndale High -- poor David is a social leper for getting an SAT score "only" in the 90th percentile -- and Graham in particular is obsessed with being 'better' than all the plebs at public school. Jodie valiantly tries to make nice, but she eventually reaches her limit when she's told they don't want to listen to her opinions until she's a Grove Hills student. She snaps, tells off the other students, and storms out, with Daria right on her heels (after getting off a parting shot of her own). She finds Jodie sitting outside on a bench and stewing over the whole experience, and both girls have a heart-to-heart talk, with each admitting that they sometimes wish they could be more like each other... and both agreeing that they're better off at Lawndale High.

Helen and Jake are pretty glad to hear that because they'd found out that nine percent of Grove Hills students have a severe mental breakdown, though Helen pretends she thinks Daria's making the wrong decision to save face ("but you said--" starts a confused Jake); the Landons have also decided that Jodie doesn't have to go, with Michelle making acidic comments in Andrew's direction about how she wouldn't make someone do something they'd regret.

When the Morgendorffers finally get home, an emotionally frazzled Jane escorts Quinn home, making Daria extremely curious about what happened over the weekend. 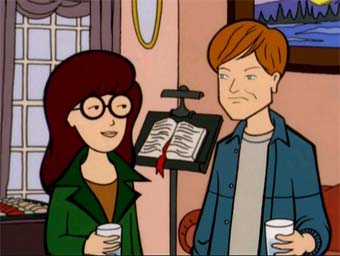 Graham realises he just got burned.

Very little has been made of Grove Hills and its "elite" cadre of students, and few fanfics have explored the alternate-universe possibilities of Daria attending school there. Brother Grimace has used the school twice: in The Trouble with Veronica, a story by that has the fanon third Morgendorffer sister, Evelyn Veronica Morgendorffer ("Evie") electing to attend Grove Hills to avoid conflicts with her sisters. In the Legion of Lawndale Heroes saga, Grove Hills student Graham is revealed to be a member of The Elite, which leads to horrifying consequences for him.

NightGoblyn has also used Grove Hills; in the Evil Daria Vignettes, after time is reset, Quinn and Evie are shown arriving for their first day at the school and being greeted by their 'cousin' Daria and her best friend, Elsie Sloane. They find out that Daria is a very popular girl at Grove Hills, and is dating Jane, whom she met on Dega Street.

Scissors MacGillicutty made a sound collage of Stacy's line to Quinn, "Don't tell anybody this, but I like you best out of everyone in the Fashion Club," over the beginning of the Concerto for Orchestra by Béla Bartók entitled Stacy/Bartok/Fear. Stacy's voice is digitally slowed down and deepened, and thick reverberation added; his intent was to accentuate the lugubrious, Single White Female-esque implications of the line. However, more than one fan could not recognize the voice as Stacy's, so he considers it a failure.

On “Gifted” the Episode