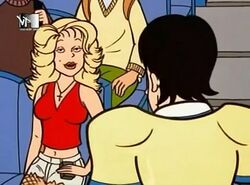 In the MTV flipbook "It Takes Two to Tangle" , it was written that their relationship was "an example of "puppy love," or more descriptively "doggies in heat." This relationship might have been saved had he bothered to learn her name."

In August 2010, Hazazel initiated a discussion/challenge for someone to explain the significance of the "Slutty Girl". Though there was some discussion, the thread soon evolved into an Iron Chef and while most fics went for comedy, a few contributions attempted to expand the character in several ways: OverlordMikey's Something they don't have showed Clair (SG) as a loose, fun-time girl who disdained others' opinion of her on the basis of her own self worth, while thatLONERchick's First Loss (the first use of Jackie Wentworth) presented her as a heartbroken girl seeking forgetfulness in the arms of faceless lovers following the loss of first love. It is suggested that Jackie met Kevin in her junior year, when Kevin was a freshman. Their relationship ended early in the year, and by the time of "This Year's Model" Jackie is a senior.

Retrieved from "https://dariawiki.org/w/index.php?title=Jackie_Wentworth&oldid=26352"
Category:
Cookies help us deliver our services. By using our services, you agree to our use of cookies.