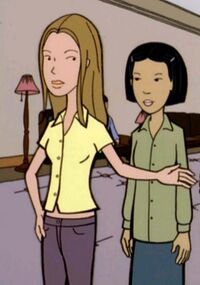 Lara is a student in Grove Hills, and one of a group of three that Daria and Jodie meet in "Gifted".

She claims she had been an intellectual outcast before going to Grove Hills, and is a fan of Ayn Rand.

She initially seems to be someone with a similar attitude to Daria, and is the first student to impress her when she makes a cuttingly sarcastic remark about the recruiter, Marina. However, as the evening goes on she shows herself to be obnoxious and dismissive of anyone with lower intelligence. She takes this to the extreme of shunning David, who she used to hang out with, after he got the 90th percentile in an SAT test; she calls him "too banal" and remarks "who does he think he is?" when he shows up.

Lara is presumably friends with Graham and Cassidy. In the final scene she's in, she's smiling happily at Graham as he goes into his speech about being with "people like us" and when he insults Jodie; she seems to like him, may have a crush on him.