From DariaWiki
Revision as of 22:53, 3 April 2018 by Charles RB (talk | contribs) (Created page with "thumb|200px|right '''Martin''' was one of Daria Morgendorffer's classmates at Highland High. He was a dorky kid who seems to a fan of Punish...")
(diff) ← Older revision | Latest revision (diff) | Newer revision → (diff)
Jump to navigation Jump to search 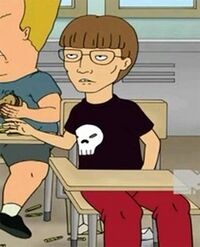 Martin was one of Daria Morgendorffer's classmates at Highland High. He was a dorky kid who seems to a fan of Punisher comics, bearing the character's logo on his T-shirt. In the non-Daria episode "Supersize Me", Martin is shown to have a voice that screams "dork" and some skill with student filmmaking.

The most significant thing about him is that in an alternate universe where Butt-head never existed, Martin is Daria's boyfriend. Unlike in the mainstream universe, both characters are happy, physically intimate (holding hands), and are merrily volunteering to help others at Christmas. Because Butt-head never destroyed Daria's interest in boys, she took him as a boyfriend; this seems to have done him some good, because he never acts happy in the regular universe. ("It's a Miserable Life") In one episode where Daria doesn't speak ("Substitute") the two are seen talking before class, so even in the main timeline he was someone she could stand talking to. What might have been... 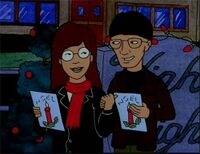 Martin turns up on rare occasions in the role of Daria's AU boyfriend, though his name is rarely "Martin" in them in pre-2011 fics (see below).

He sometimes turns up in the comics with different coloured hair.

He had no name (or voice) until the 2011 Beavis and Butt-head episode "Supersize Me".