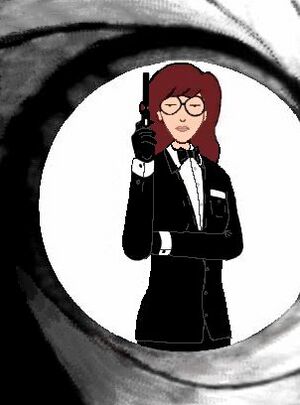 Jane's version of Daria as Melody Powers, by Richard Lobinske.

Melody Powers is a fictional spy character developed by Daria Morgendorffer and included in stories featured in the episodes "Cafe Disaffecto" and "The Old and the Beautiful." The character's stories appear to be set during the Cold War, as she uses sex appeal and bloody brutality to fight Communists. What little we know of Daria's writing indicates that her Melody Powers stories are rather over-the-top with death and violence, almost parodying the genre of spy fiction. Daria displays no antagonism toward Communism or Russians otherwise, leading one to wonder if her Melody Powers tales are a sort of metafic. 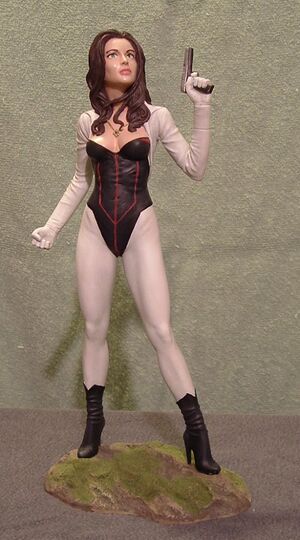 Another concept of Melody in 1/8 scale, by Richard Lobinske

Having Daria write Melody Powers stories has become a staple in fanfiction writing. In Richard Lobinske's Last Summer and Falling Into College stories, Daria published a total of four Melody Powers stories with an action pulp magazine called Literature in Action. Daria has a Melody Powers story published in "Prayers for a SAINT" that causes unexpected problems. A few fanfics have Daria become the famed author of Melody Powers novels ("Of Lifestyle Choices and Definitions of Success," by Wyvern337), which might result in Daria attracting the most unusual fans ("It's a Wonderful Life, Not," by Thomas Mikkelsen). The Melody Powers meme is so pervasive that Daria writes these stories in various alternate universes (John Lane series by Richard Lobinske and God Save The Esteem by Charles RB), even when Daria is no longer Daria but Darren ("Café Ineffective," by Bacner).

A possible (hilarious) reason why Daria writes Melody Powers stories is offered in Thomas Mikkelsen's "Sibling Rivalry." That Daria might be quite touchy about her Melody Powers works is considered in E. A. Smith's "So Long As Men Can Breathe" and Renfield's "Malice of Absence."

Fanfic writers occasionally try their hand at writing Melody Powers stories as they imagine Daria would do them. This has become an interesting sub-subgenre. Galen Hardesty probably gave the best rendition with "Blood Oath of Patriots" and "Blood Oath of Patriots II: By Any Other Name." Mystik Slacker's "Melody Powers in 'Butcher, Baker, Cancer-stick Maker'" and Wyvern337's "Academic Imprisonment" are also excellent, and Mahna Mahna's "The Last Words Heard" has a perfectly wicked ending. Other tales in this vein worth reading include Bob Marley's ficlet, "Melody's End."

Sometimes in fanfiction, Melody is written as a self-insertion or Mary Sue of Daria herself (Wyvern337's "Academic Imprisonment"). Melody might even be Daria in disguise (e.g., "Alias: Melody Powers," by Kendra Steiner; "Melody Powers a.k.a. Daria Morgendorffer," by James Scanlan). Mystik Slacker's True Cynicism tales have Daria make a shocking discovery that leads her into a life not unlike Melody's. (This also happens in "Prayers for a SAINT.")

In a few stories, Melody is a real person in the Dariaverse or somehow is brought to life therein. This might prove to be calamitous for all concerned (e.g., "Illusions: The Unswerving Punctuality of—," by CharlieGirl and et alia; "Daria vs. Melody Powers" by S.C.).

Retrieved from "https://dariawiki.org/w/index.php?title=Melody_Powers&oldid=22288"
Categories:
Cookies help us deliver our services. By using our services, you agree to our use of cookies.