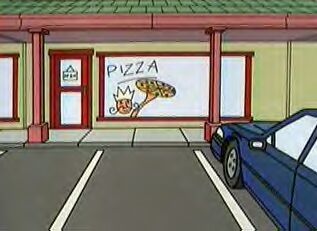 In Jane's "Gourmet Guide to Pizza Pleasures" webpage, the Pizza King is given her highest rating of 9.8 for "Perfect cheese-to-crust-to-sauce ratio. Just enough unidentifiable burnt things."

Retrieved from "https://dariawiki.org/w/index.php?title=Pizza_King&oldid=11557"
Category:
Cookies help us deliver our services. By using our services, you agree to our use of cookies.