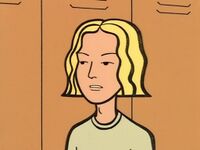 Ronnie goes on to appear in background of numerous scenes. He was one of the few people watching Bing and the Spatula Man (during their attempt to get Upchuck a date on the radio) who seemed unimpressed with the show ("Jake of Hearts"). He is similarly unimpressed when Kevin cocks up in "The F Word".

Retrieved from "https://dariawiki.org/w/index.php?title=Ronnie&oldid=27089"
Category:
Cookies help us deliver our services. By using our services, you agree to our use of cookies.