St. Patrick's Day is a holiday character and national stereotype who, along with Cupid, arrives in Lawndale in "Depth Takes A Holiday" searching for Christmas, Guy Fawkes Day, and Halloween, who have escaped from Holiday Island. St. Patrick's Day is described early on as a leprechaun but if so, he's a pretty tall one. As he and Cupid are specifically on the mission, he is presumably one of the more competent holidays; he's the leader of the duo, but gets irritated with Cupid's laid-back, passive nature. 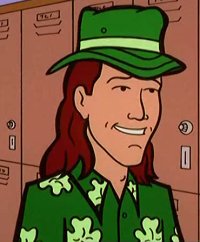 Because he is an Irish holiday, St. Patrick's Day holds a lot of animosity towards Guy Fawkes Day, who is a British one. He once grumbled about being "oppressed for four centuries" - roughly when the Tudor conquest of Ireland occurred, when England (which already officially ruled Ireland) deliberately tried to devastate Gaelic culture and polity - but in the present sense, so he's presumably an Irish Republican and views Northern Ireland as occupied land.

Someone will ship this one day.

St Patrick's Day has had a surprisingly large amount of fanfic appearances! A number include Cupid.