Difference between revisions of "Sandi Griffin"

In fifth grade, she had braces and she doesn't want anyone at Lawndale High to know about this ("Lucky Strike"). (Either she went to a different elementary school to most of her peers or they've forgotten about it)

Sandi went to "Gle field" Middle School. She volunteered for the school's dance committee, which was a massive disaster - particularly with her bratty brothers deliberately damaging stuff - and this put her off volunteering for life; her mother simply told her, smugly, "to volunteer is to say, 'use me'". ("Daria Dance Party")

She said she founded Lawndale High's Fashion Club. Since Daria arrived early into Sandi's first year at Lawndale and the club already existed, Sandi must have done this very early on.

For years, she had a cat called Fluffy.

Sandi is the self-appointed ruler of small but influential clique, the Fashion Club, and is the group's undisputed queen bee—until the arrival of Quinn Morgendorffer, that is. Initially, she seemed friendly to Quinn and almost immediately made her the VP of the Fashion Club. It wasn't long, however, before Sandi became intensely jealous of Quinn's greater popularity and cuteness (starting at "Too Cute").

She is always trying to one-up Quinn, usually with a thin smile and very unconvincing politeness. Sandi often bullies the members of the Fashion Club into doing things her way, and delights in pointing out "obvious" flaws in Quinn's dress, plans, lifestyle, or family, to which Quinn usually replies with a shaky, "Oh, Sandi! Of course not..." followed by a statement that she really meant to say or do something that agreed completely with what Sandi thinks. Quinn, meanwhile, tried to launch a coup against Sandi when she wasn't present for a March meeting of the Fashion Club; she asked the others if they thought Sandi was a good president and suggested she'd tried to "set them up" with her fashion claims, but quickly backtracked when Stacy and Tiffany said they thought Sandi was a good prez. ("The Daria Diaries")

Sandi frequently tries to deflate Quinn's popularity and often well-meaning suggestions. She recruits the remaining Fashion Club members to oppose Quinn's plans by playing against their insecurities and leaving them no choice but to follow suit. For the most part, Sandi's vengeance is usually quelled by Quinn's remarkable good fortune and incurable popularity. In the episode "Daria Dance Party," Sandi deliberately abandons Quinn when she volunteers the Fashion Club as the leaders of the school dance committee (due to a "traumatic" event in her preteens when she became overwhelmed with planning a dance; in response to this, her mother told her that "to volunteer is to say 'use me'"). Instead, Sandi plans an unsupervised house party on the very same night, tempting guests to attend with promises of free pizza, a big screen television, and an outdoor hot tub. The plot is foiled, however, when the boys invited to Sandi's party make a hasty exit after discovering that Quinn will not be attending. Similarly, in the episode "Just Add Water", Sandi delights in the opportunity to publicly humiliate Quinn by speculating and gossiping about the possibility of Quinn being stood up by her date, Marco, "the talcum powder model." This plan, too, backfires, as Quinn feigns strength and independence and Sandi is eventually dumped by her date, Brent. 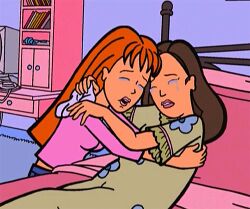 An even rarer moment of true friendship ("Fat Like Me")

Although Sandi and Quinn are often at odds, there is a measure of sincerity in their friendship. When Sandi unexpectedly gains weight in "Fat Like Me," she withdraws from the Fashion Club out of embarrassment and shame. In an attempt to kill Quinn's chances of succeeding as Fashion Club President, Sandi manipulates Quinn into surrendering her position as Vice President, supposedly "out of respect for [their] friendship." Although flustered, Quinn continually visits and cares for Sandi, eventually encouraging her to follow a strict routine of diet and exercise so that she can return to her normal weight. Quinn's motives aren't entirely pure, however, as Daria points out that Sandi's weight gain could place a depreciating value on Quinn's social status. Regardless of motive, Sandi is moved to tears by Quinn's kindness, and the two girls declare their love and appreciation of one another. At the end of the episode, Sandi has mostly returned to her normal vindictive self, only slightly changed by her experience—but she never afterward speaks ill of Quinn or treats her badly.

A running gag throughout the series is Sandi's consistent outing of Quinn's family in public places. Quinn, who is embarrassed and reluctant to admit any relation to her parents or older sister Daria, will often downplay their existence or their family ties. When Quinn finally admitted they were sisters in "Lucky Strike" and it turned out everyone else had figured it out, Sandi was left stunned.

Sandi is a very deliberate, cautious leader, who is rarely indecisive and shows few weaknesses. As such, she sets the agenda for most of the Fashion Club's projects and weekly obsessions. Sandi enforces her control over the other girls by requiring their exclusive loyalty to the Club and Sandi herself. This loyalty is often challenged, especially in episodes "The Daria Hunter" and "Antisocial Climbers," where the Fashion Club finds itself divided in support of either Sandi or Quinn.

Sandi's ability at school is shown to be incredibly bad, though this may be down to apathy rather than intellect: in "Lucky Strike", she doesn't realise that the lead in Romeo and Juliet is called Romeo, and doesn't bother to take any notes. She's notably dismissive about teachers and tutors any time she mentions them.

In "Is It Fall Yet?", however, she lies about her P-STAT scores rather than admit Stacy and Quinn got higher scores than her.

Sandi's mother, Linda, a successful businesswoman, often clashes with Quinn's over-achieving and competitive mother, Helen. Linda and Helen's relationship mirrors that of their daughters, with each woman trying to out-do the other in terms of successes in work, family, or physical attraction, while feigning polite friendship (often through gritted teeth). While Helen would rather not deal with Linda's pretentious boasting, Linda takes every opportunity to ruffle Helen's feathers, even encouraging Sandi to do the same with Quinn... and even looking happy when Quinn is humiliated in public. Outside of clashes with Helen, she's advised Sandi not to bother doing volunteer work and was smug when Sandi's attempt to do so went wrong.

Sandi's father, Tom, is a chartered accountant (per The Daria Database). Due to his almost lack of screen time in the series, almost nothing his known of him. His only short appearance in Fair Enough suggests he has a lack of backbone and control over his own family, a theme often explored in fanfiction.

The Griffins' home in Lawndale

In the fifth series, Quinn began to challenge Sandi's authority in the group more openly and successfully, and there were indications that Quinn no longer valued her Fashion Club membership; the insecure Stacy Rowe also started to stand up to Sandi, possibly inspired by Quinn. "Fat Like Me" saw Stacy support one of Quinn's challenges; "Lucky Strike" had Quinn stand up to Sandi over Daria's substitute teaching, with Stacy (and Tiffany) deliberately undercutting Sandi's subsequent attempt to shame her for being related to Daria; and "Life in the Past Lane" had Stacy work with Upchuck despite Sandi's dispproval, and even get a dig in at her. In each case, Sandi backed down rather than continue the fight.

The MTV "Fashion Club Guide to Digital Dating" website revealed that Sandi has to look outside of Lawndale to find dates, due to "a completely undeserved reputation for paranoia and viciousness. When I find out who's behind those rumors I will skin them alive."

The series ended the entire fashion club taking an indefinite sabbatical, though despite no longer being a formal club, they continued to be friends. What happened beyond this was never revealed.

Sandi at middle school, getting upset; her mother Linda Griffin is amused by it. ("Daria Dance Party")

Sandi Griffin's less engaging behaviors often lead her to be pegged in fanfic as a four-star power-hungry bitch. Sympathetic portrayals of her are not common. Kara Wild's "Outvoted" and "Quinnicitis" are excellent examples. In Wouter's Dariarotica story "Party at Lindy's" when Quinn is imagining her friends in sexual situations, she depicts Sandi as the kind of person who would probably like rough sex, because of her bossy nature. In that same story Sandi is seen telling in detail about her, alleged, sexual encounters to a severely emberassed Quinn taking delight into making Quinn feel uncomfortable. Although in the lunchroom scene where Quinn gives her friends an unwilling carte-blanche into her erotic encounter, Sandi is seen with a look of pure disbelieve on her face. And in "Through a Webcam Lens Darkly" Sandi is all too happy to place a webcam in Quinn's room so that her brothers can peek in on her. When Sam asks why she went along with it because of she and Quinn are supposed to be friends, Sandi replied by saying that she had her own reasons and left it at that.

Fanfiction occasionally depicts a Sandi Griffin who seeks redemption for her various sins. A "Redeemed Sandi" has usually passed through horrifying experiences, not always as a result of her own actions, and is at or near the bottom of her life, emotionally and spiritually. One fanfic writer who has embraced this concept is Brother Grimace; many of his fanfics, most notably "It's All About Respect" and "The Devil in Miss Morgendorffer," make extensive use of this plot device. Sandis who have been transformed by suffering, either self-caused or accidentally, appear in Kara Wild's Driven Wild Universe, Richard Lobinske's Falling Into College series, Canadibrit's The Look Alike Series, and TAG's "Winter in Hell," "Nine Point Oh," and "When the Torrent of That Time Comes Pouring Back." In recent episodes of Legion of Lawndale Heroes, events seem to indicate that Sandi is taking a similar turn for the better.

Many fics depict Sandi's personality flaws as the result of a troubled home life. Generally, such fics show Sandi's mother Linda as a hard-driving women with a take-no-prisoners attitude who expects her daughter to live up to her example and Sandi's father as a henpecked nobody who bows to his wife's will in everything, including raising the children (though "Winter in Hell" had him not care about Sandi at all). In many cases, the Griffins are depicted as on the edge of divorce if not actually already divorced. Troubled Home Life Sandi is often portrayed sympathetically and sometimes becomes Redeemed Sandi, with the collapse of her parents' marriage being the experience that molds her.

Examples of Troubled Home Life Sandi that do not cross over into Redeemed Sandi include GTS, especially GTS #4: Closets Are for Hang-ups, Heartbeat in Iambic by Dennis, and Moving the Goalposts by Kristen Bealer.