Scientific Stuff was an early episode of Beavis and Butt-head, and the first ever appearance of Daria Morgendorffer. As David Felton is credited as Daria's creator by Mike Judge, we assume he wrote this episode. 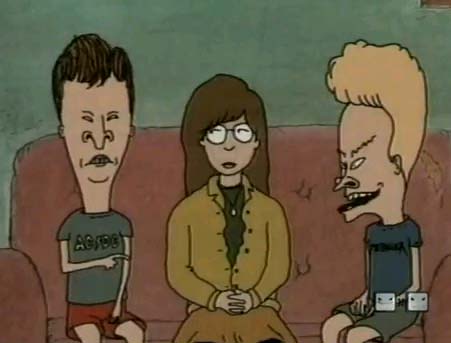 WELCOME TO THE DIMENSION OF PAIN

Beavis and Butt-head present their latest science project to Mrs. Dickie: a cheap model of the space shuttle Challenger that they blow up. When she disgustedly asks Butt-head how he could do something so tasteless, he cheerfully replies "Beavis helped me" and the two air-guitar in triumph. The teacher orders them to do another project ("but we're out of firecrackers"), and assigns them to work with Daria, "our straight A student who won the science fair last year". Both parties are reluctant:

but Mrs. Dickie forces them to work together. Butt-head is disgruntled they have to work with "Diarrhea".

When she asks them how they learned to be so disgusting, Butt-head proudly informs her he learned everything he knows from his dad. Beavis agrees.

The next day at school, the three are then seen presenting their project, "Idiocy: Genetic or Environmental?" to Mrs. Dickie's science class. This basically is Beavis and Butt-head hurting themselves in front of everyone:

[Everyone applauds, including Daria]

[Butt-head begins to demonstrate, while Beavis resumes his "song"]

As Daria spans roughly three years, her time in Highland High is usually taken as a single year by fandom. Unfortunately Beavis and Butt-head didn't know the future and so Dickie says Daria won the science fair "last year", when Daria continuity requires her to be in junior high.

As Mike Judge has cited David Felton as coming up with Daria's character (on the Mike Judge Collection DVD), Felton likely wrote this episode.

This earliest form of Daria doesn't yet have her cutting sarcasm (bar her final line) and she speaks in a more high-pitched, expressive tone. Her misanthropy, tendency to manipulate, and intelligence are all on display already. The outfit she's wearing will shortly change, though a slight variation of it will be used in the comics and other spinoff media anyway.

In repeats, the farts line was cut as part of MTV's mass censorship of Beavis' pyromania.

This episode was only released on the extremely rare canceled DVD set "The History of Beavis and Butt-head."

This was the first B&B episode where we saw more of their house than just the couch: the two meet up with Daria in Beavis' bedroom. The full explanation of what's in and around that room is described in "This Book Sucks" where disturbingly, Butt-Head refers the pillow on the bed as "Beavis' girlfriend".

This is the only episode of Beavis and Butt-head where Daria has a major plot contribution. In other episodes where Daria has a speaking role, she does not play a central role in the plot and merely provides observation.