From DariaWiki
Revision as of 19:51, 6 April 2018 by Charles RB (talk | contribs) (Created page with "thumb|250px|Daria, pissed off with being a fashion photographer. '''Sporting Goods''' is an episode of ''Beavis and Butt-head (TV series)|Beavi...")
(diff) ← Older revision | Latest revision (diff) | Newer revision → (diff)
Jump to navigation Jump to search 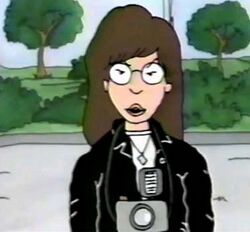 Daria, pissed off with being a fashion photographer.

Beavis and Butt-head are setting on the stoop at what appears to be Highland High. Butt-head holds a grasshopper up, and Beavis flicks his lighter as he tries to set it on fire. Daria, carrying a camera, walks by and stops.

In gym class, Beavis and Butt-head are forced into dodgeball by Coach Buzzcut (i.e. an excuse for him to throw things at them). A throw by Buzzcut hits Beavis in the groin, and Beavis's clutching his junk leads Buzzcut to conclude that Beavis and Butt-head are not wearing athletic supporters - a requirement for gym class. Buzzcut warns the two that they had better have athletic supporters by their next class, "or you'll be assigned to my remedial squat-thrust seminar this summer".

Beavis and Butt-head show up at Buddy's Sporting Goods to purchase supporters, basing their decision on how Buddy "did time" and is therefore "cool". Buddy tells the two to try on some athletic supporters over their pants. However, even the smallest athletic supporters are too large the two - but Buddy has some old eyepatches that were meant to be used for racketball injuries. Never used, Buddy gives them to the boys for free. 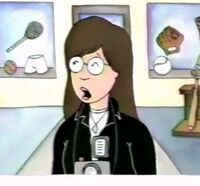 The patches are too tight for the boys to wear over their pants, so they decide to disrobe and try them on. Meanwhile, Daria shows up at Buddy's Sporting Goods as part of her role as fashion reporter.

The voices draw Daria's attention, as Beavis and Butt-head leave the dressing room, pantsless - clad in only the eyepatches covering...well, you know.

Daria takes a picture. Beavis and Butt-head immediately pull down their T-shirts to cover themselves. Daria smiles.

The next day, Beavis and Butt-head bring a poorly spelled note to Coach Buzzcut, claiming that there is a national "sipt-odder" shortage and therefore they couldn't purchase supporters. Buzzcut begs to differ. He has proof that they were able to find supporters after all, holding up a copy of the Highland Herald with a front-page article by Daria Morgendorffer: "Highland Fashion: The Thong Has Arrived!" is the headline, and the picture of Beavis and Butt-head wearing eyepatches on their groins is front-page news. The lads stare in horror at the sight.

Buzzcut laughs, and commands his class to do squat thrusts. Beavis and Butt-head will have to suffer with the rest of the class. 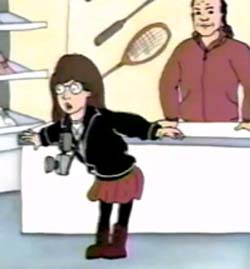