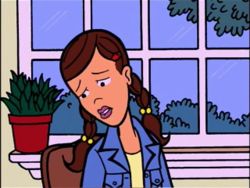 Stacy Rowe, in a scene from Is It Fall Yet?

Stacy Rowe is a fictional character created for the MTV animated series Daria.

Stacy Rowe was a freshman (and later sophomore and junior) at Lawndale High, and secretary of the Fashion Club; a quartet of fashion-obsessed teenage girls who held regular meetings to discuss various facets of the fashion world and, in their own words, "solve crimes against fashion."

Stacy was perceived as "the weakest link" of the Fashion Club by club president Sandi Griffin and was sometimes humiliated and verbally abused by her. Stacy was constantly insecure to the point of neurosis and would hyperventilate or burst into tears when bad things happened to her.

She constantly sought the attention and approval of fellow Fashion Club member Quinn Morgendorffer and would often side with Quinn when her friend butted heads with Sandi Griffin before getting bullied into taking Sandi's side. In a memorable scene from "Gifted," Stacy completely relinquishes her own tastes so they become exactly like Quinn's, a change that Quinn didn't approve of. It is shown on that episode that Stacy looks up to Quinn and considers her to be her best friend, sometimes to a point that even Quinn cannot tolerate. It should be noted, however, that Quinn may consider Stacy to be her best friend, as well: In the beginning of "Of Human Bonding," when Quinn is only allowed to invite one friend for sleepover, Stacy is her first choice.

During Season Five of Daria, several episodes spotlighted Stacy: she was the only member of the Fashion Club to be drawn favorably in a group caricature portrait; she was Charles "Upchuck" Ruttheimer III's assistant in a magic act in "Life in the Past Lane" (where she memorably chided Sandi 'for being naive'; and she snapped at Tiffany Blum-Deckler over her absent-mindedness when the two were left to run the Fashion Club all by themselves in "Fat Like Me."

In the second movie Is It College Yet?, Stacy wished that Sandi would stop talking at her birthday. Sandi then came down with laryngitis and Stacy believed it was her fault (Sandi went as far as calling Stacy a "saboteur"). Even though it was proved that it wasn't Stacy's fault, Sandi tried to get her to do a list of "chores" as an apology. Stacy refused and decided to take a sabbatical from the Fashion Club. (Note: It is disputed whether The Fashion Club still exist as an hierarchical group in the post-canon.)

Another (albeit rarer) theme involving Stacy has her somehow turning to the darker side of her nature. In most of these depictions, Stacy is seen almost as the archetype of a vampire: cruel, cunning, and amoral, with no hesitation or remorse about harming or even killing others, and lascivious almost to the point of being a sexual predator. In some of these stories, Stacy has also developed some form of supernatural or superhuman abilities, and has no qualms about using them. Stories of this type include "No More Ms. Nice Vampire" from the Daria the Hunter series, "Daria vs. the Lawndale Zombies," "Where's Mary Sue When You Need Her?," and the Legion of Lawndale Heroes series. Examples of non-super Dark Stacys appear in Angelinhel's "We All Fall Down," Brother Grimace's "Word of the Week," NightGoblyn's "Evil Daria Vignettes," and TAG's "Stacy in Hell."