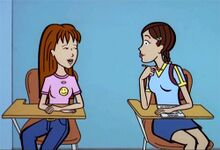 Her academic ability and intellect was mediocre: in "Daria Dance Party", she has to be reminded that an essay on Hemingway for English class refers to the writer and not actress Mariel Hemingway; her P-STAT in "Is It Fall Yet?" was only 940 (though this was the second-highest in the Fashion Club) and she made very dumb comments when being tutored; and in "Lucky Strike" she's horrified at the thought of a 200-word essay and copies Sandi's essay even though it's being handed to the same teacher. "IIFY?" has her express the fear that "I'm such an idiot. I'll never get anywhere in life!". Tutor David Sorenson does note that while she's not doing very well, she is trying to learn unlike the rest of the Club. She nevertheless had a meltdown during their first lesson; it is unclear whether they had any more after that.

The caricature drawn in "Art Burn"

In the second movie Is It College Yet?, Sandi continually makes condescending comments during Stacy's birthday party, and Stacy wishes that she would "stop talking" while blowing out her candles. Sandi then came down with laryngitis and Stacy believed it was her fault (Sandi went as far as calling Stacy a "saboteur"). She spent most of her scenes in the film trying to 'cure' Sandi through voodoo and magic. Even when Sandi got better, she tried to get Stacy to do a list of "chores" as an apology. Stacy quietly refused and decided to take a sabbatical from the Fashion Club, showing backbone once more: in doing so, she was the cause for the whole Club to break up, which she still found an upsetting thought (even though it was clear they were all going to keep hanging out anyway). (Note: It is disputed whether The Fashion Club still exist as an hierarchical group in the post-canon.) 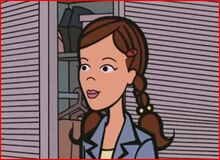