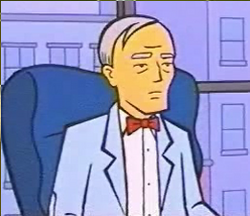 The Aurora Borealis, at this time of the year, in this part of the country, located solely in Lawndale High?

Superintendent Cartwright is the superintendent of schools for Carter County/Lawndale County and Angela Li's boss.

Li desired to get a commendation from "the superintendent of schools" in "The Old and the Beautiful", and achieved it by forcing every student to sign up for volunteer work. He wrote a gushing letter to both her and the students (she only cared about the former).

First introduced as a proper character in "Fizz Ed", Daria Morgendorffer resorted to going to him in order to stop the Ultra Cola sponsorship deal. However, Cartwright tried to make the problem go away and implied Daria was only doing this protest to have an extracurricular for college applications: as far as he was concerned, "Lawndale High is now the only school in the county running a surplus" and he was hoping to thus bring the sponsorship to the whole county. Daria managed to get him to reluctantly agree to maybe sorta visit the school later someday.

He did visit on the day Li had a psychotic breakdown over Ultra Cola's contract and threw the school into violent chaos. He watched silently, and Daria watched him silently. The contract was quietly altered and never rolled out.

Cartwright irregularly shows up as an authority figure, either a brake on Li or a figure of corruption, depending on the needs of the story. In TAG's But In Her Heart A Cold December, a rare sympathetic portrayal of Li (where she is a Korean expat fleeing North Korean intelligence), he is an allied figure..