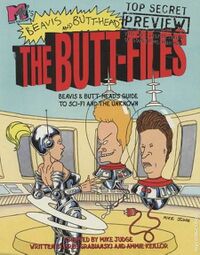 The Butt Files is a 1997 book written by Greg Grabianski and Aimee Keillor as part of the Beavis and Butt-head canon. It is currently out of print. This is Daria's only other in-person appearance in the Beavis and Butt-head books; her first appearance was in "This Book Sucks". The book was included as part of the 2005 omnibus volume "Reading Sucks".