“This Year's Model” was the sixth episode of the first season of Daria.

In this episode, Daria deals with a modeling agency coming to her school to recruit the next generation of models from among the student body.

At Lawndale High, principal Angela Li interrupts English class to enthusiastically announce the visit of representatives from the Amazon Modeling Agency who are searching for potential models among the students. As modeling is a shallow profession based on youth and looks, both Daria and Jane protest - and at the same time hint of the possible money the school is being offered for the visit. Jodie argues with Daria and Jane, saying that the two don't have to be against everything.

As Mrs. Bennett explains the marketing aspects of the fashion industry, Amazon representatives Claude and Romonica DeGregory appear during Economics class and give Mrs. Bennett fashion advice. Their goal is to convince students to sign up for a complementary modeling class. Brittany agrees right away, but they are less successful with Daria and Jane.

During dinner at the Morgendorffers a very upset Daria relates the day's events to her parents, stressing the dishonesty of the whole situation. Both Helen and Jake agree with her. When Quinn enthusiastically announces that she has been chosen for the modeling class both parents try to dissuade her, stating that modeling is not a good choice for a profession, and only a timely call from Romonica convinces Helen to let Quinn attend the free modeling class. As Quinn leaves the kitchen, Helen asks (and eventually bribes) Daria to keep an eye on her sister.

The modeling class is held at the school auditorium and includes the four Fashion Club members and a red-haired, slightly plump girl (whom Romonica calls a "decoy"). Romonica and Claude first coach the female students on how they must walk and what attitudes they should project. They then invite Kevin and the Three Js to help out, asking them to remove their shirts and have the girls rub their chests. Quinn is clearly ill at ease and excuses herself (claiming that she needs to visit the bathroom) but the other girls oblige. Brittany, watching from the audience with Jane, Daria and Trent, has a crying fit watching Kevin on stage and is miserable for not having been chosen to attend the class. However, when Ms. Li enters and views the salacious scene taking place she immediately stops it and ends the class.

Later that night, the Morgendorffers discuss the day's events, with Quinn enthusiastically thinking she’ll be chosen for the modeling contract despite her parents' warnings that they hadn't agreed on further participation and that she might not win - a thought inconceivable to Quinn.

At an auditorium assembly Mrs. Li is preparing to announce the winner for the modeling contract (after warning the students that modeling has nothing to do with sex, to the amusement of some of those present). She is unexpectedly interrupted by the arrival of General Buck Conroy, mercenary and editor of Brutal Mercenary Magazine - Conroy is also looking for potential recruits. He answers a surprised Mrs. Li that it had been her idea to contact him, showing her an invitation with her name. A television news crew shows up and states that although Li denied inviting Conroy to the school, she allowed a modeling school to solicit students on school property.

That night the Morgendorffers the family learns that Kevin, of all people, has received the modeling contract. Later, Daria is shown in her room retrieving the issue of Brutal Mercenary Magazine from her backpack (implying that she was the one to have mailed Conroy) before tearing it up. In the final scene, Kevin is shown during a photo session in the modeling agency, clearly having no idea what to do.

Daria is reading Henry David Thoreau's Walden in the kitchen in the scene immediately following the class in the auditorium. This is for a school assignment: the opening scene has Mr. O'Neill trying (unsuccessfully) to engage Brittany Taylor in a discussion of whether Thoreau's retreat "to live deliberately" is a withdrawal from life or an attempt to understand its essentials. Walden is also referred to obliquely at the end of the episode, when her father exclaims in shock at the news of a scandal on the local news, "Does no one have any ethics anymore?" Daria replies, "Only you and Thoreau, Dad." 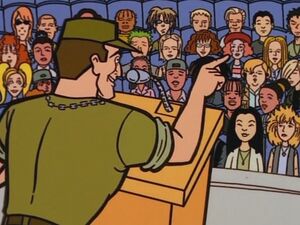 "YOU! Don't think we can't see you in the corner, Trent Lane!"

The title of the episode is a play on the 1978 Elvis Costello and The Attractions album, This Year's Model.

Trent shows up to see the modeling and then is later in the school assembly audience. How did he get in the second time?!

After agreeing with his daughter about ethics, Jake goes off because he remember he has to "call that baby formula guy": a reference to the ongoing Nestlé baby formula scandal.

Jane refers to her and Trent's parents as being at home, and that they "moved" there (which will later be contradicted by Art Burn).

“This Year's Model” and Fanfic