Tom Griffin is an accoutant by trade, the husband of Linda Griffin, and father of Sandi, Chris and Sam Griffin.

Tom has a very short screen time, only making a very brief appearance in the season 2 episode "Fair Enough" where he's a feeble individual (he then disappears after chasing after his sons). He knows the Morgendorffers and they know him.

He appears in a family portrait in The Daria Database, along with his age and profession (he's a CPA by then), and his recurring questions about whether he should have married "plain Petty Wells" instead. "She was always so happy to see me and such a good sport. Still, there was that mole..." 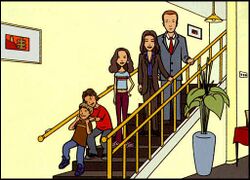 Look upon my works and despair.

Tom Griffin is often portrayed as man unwilling to stand up to her wife Linda and unwilling or incapable of handling his two sons. The Griffins married life is also often presented as all but happy.

He is usually a secondary character in the stories he appears in.

Stories in which Tom notably appears or has a noted influence are: