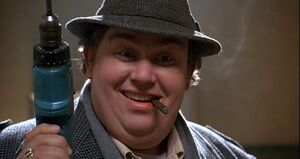 Two-Eyed Charlie is a fanfic writer. As a Canadian, he is legally required to present this page to you in French as well.

Beyond a crippling inability to sepll properly, other neurosis that infect Two-Eyed Charlie every day are an insistence on talking politics (his avatar on the PPMB is Theodor Adorno; you were warned) and a liking of seasons 4 and 5 more than the previous three, something he blames on having seen those episodes first as well as the insidious influence of Michel Foucault (see what I mean about politics?). He also only recently was reminded of the potential usage of a semi-colon--after being thrown into grad school--and has never met a short story that he can't bloat until it becomes unwieldy.

The littered remains of attempted stories lie everywhere, including one where Daria is Hunter S. Thompson and a cross-over with John Carpenter's "The Thing" (which became a Justice League fanfic that he also didn't finish).

But other than that, he's happy to be here. Only time'll tell if others feel the same way.

Retrieved from "https://dariawiki.org/w/index.php?title=Two-Eyed_Charlie&oldid=27386"
Categories:
Cookies help us deliver our services. By using our services, you agree to our use of cookies.