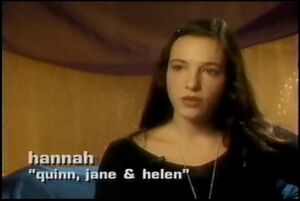 Wendy Hoopes in Daria: Behind the Scenes 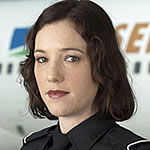 Hoopes was born in Kuala Lumpur, Malaysia and was the fourth of five children in her family. She spent her childhood travelling overseas, particularly to America, where she received her Bachelor of Fine Arts degree at New York University's Tisch School of the Arts. Her first major acting accomplishment was her creation of the character Bee Bee in Eric Bogosian's production SubUrbia at Lincoln Street. Her next notable achievement was receiving multiple roles on Daria.

She has also featured in many theatre productions, include a rock musical about Janis Joplin, and she provided the voice for Mona Sax in the video game Max Payne 2: The Fall of Max Payne.

In 2017, Hoopes arrived on twitter and Youtube to gift as with record a spoken version of a meme, where President Trump's words were put over a photo of Quinn. It was brilliant.

Ms. Hoopes's regular speaking voice is closest to Jane Lane's, which is demonstrated in Daria: Behind the Scenes. The film also has an impromptu dialog between Quinn, Jane and Helen by Ms. Hoopes.