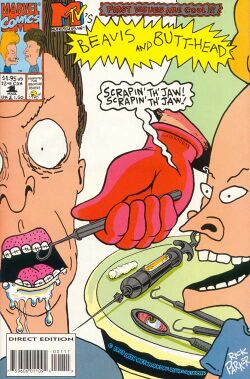 Beavis and Butt-head #1 is the first issue of the Beavis and Butt-head comic, seeing print in either January or March 1994 (see Trivia). All strips and features were done by Mike Lackey (writer), Rick Parker (art and lettering), and Bob Sharen (colours), with Glenn Eichler as consultant.

Beavis and Butt-head have arrived at Finley's Maxi-Mart with a craving for food, and are confused by the sight of so many yams at the store - they agree "yams suck", though they aren't sure what a yam is. When they see Mr Anderson trying to get yams to his car, they gleefully note he's sweating so bad he might die ("old people suck!"). Not realising he's talking to Beavis and Butt-head, he asks them to carry the yams to the car for him in exchange for fifty cents. The lads agree money is cool but soon find physical labour sucks, and Beavis is soon asking if they can "drop our load now". Mr Anderson happily drives off... not realising the duo didn't put the yams in his car and have just swindled him out of both food and money. 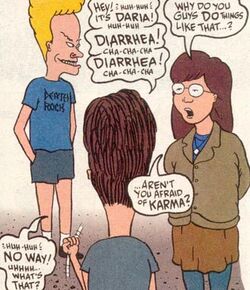 Now out of pocket, the lads go into the mart to see if they can get a refund on the yams. The mart is full of nothing but yams... so, being Beavis and Butt-head, they ask Finley if he has any yams. He goes into a deranged rant about all the yams he has... and finding that cool, they pretend they missed it so he has to repeat it, then ask for some chocolate bars anyway. (Butt-head's going to throw his in the pool, and Beavis wonders if it can swim) Finley brings in the last two Squishy Bars but when he hears they have no money & are after a refund, he goes in a psychotic, foaming-at-the-mouth rampage to kill the duo - unfortunately for humanity, a policeman busts in, and is horrified to see the brown sticky fluid all over Finley's hands (where he's crushed the chocolate bars). Beavis and Butt-head help get Finley arrested by pretending that they know it's fecal matter, and once they're safe... eat the crushed bars from off the floor.

Alas, the chocolate gets stuck in Butt-head's braces and it's so bad and disgusting and causing such pain, he's forced to see the dentist. (Beavis thinks this must be "that 'Karmel' Daria's talkin' about") A scared Butt-head asks Beavis to come into the dentist's with him for moral support ("I bet there's lots of blood when he yanks out your teeth!"), and the dentist takes a look: Butt-head's mouth is so disgusting that he barfs. But he's a professional and is soon having at Butt-head's teeth with a huge cleaver, a chisel, a hammer, pliers... it is the coolest thing Beavis has ever seen. Up until he realises the dentist has a really fat butt, and that there are sharp instruments around. After a few seconds of hard thinking, the ecstatic lad picks up a needle full of novocaine and jabs it in.

The dentist falls down, knocking open all the nitrous oxide canisters ("I smell gas!" "Uhhh, he who smelt it dealt it!") and is driven into a laughing frenzy. The gas soon fills the building and the street outside, and Beavis and Butt-head become incredibly irritated by everyone laughing constantly: "This is so, like, uhh... annoying!" Beavis then wonders why they're even there at all and Butt-head realises he's forgotten, so they head off to throw yams at cars. 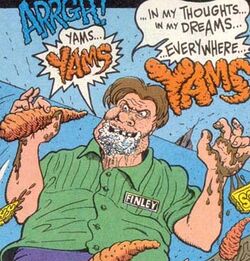 Parker's normal style.
Retrieved from "https://dariawiki.org/w/index.php?title=Beavis_and_Butt-head_issue_1&oldid=26296"
Category:
Cookies help us deliver our services. By using our services, you agree to our use of cookies.