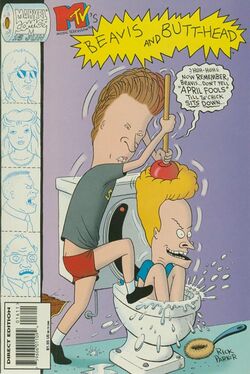 Beavis and Butt-head #16 was the June 1995 issue of the Beavis and Butt-head comic. All strips and features were drawn by Rick Parker (art and lettering) and written by Guy Maxtone-Graham, with colours by Rob Camacho; Glenn Eichler was consultant. Contents

Mr. Van Driessen cries out "April Fools!" and that he'd included that as a joke, and everyone can ignore that question - Beavis and Butt-head are confused which question that was, Butt-head believing he means the question that sucks (Beavis asks Van Driessen to be more specific). The teacher starts to talk about the tradition of April Fool's Day, causing Butt-head to yell out "who gives a rat's ass?" and, when it's pointed out he said "ass" in class, says it's "April Fools or something". When that actually works, the lads theorise that you can say or do anything and get away with it as along as you add "April Fools!" to the end - so off they go hitting on girls, eating food without paying, narcing onTodd Ianuzzi, trying the pull-my-finger joke on Butt-head ("NO WAY, Dillhole!")... weeks after April 1st. 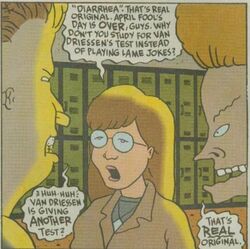 Thinking quickly (sort of), they tell Van Driessen he can't hold the test because there's a flood in the basement. He evacuates the school, but upon searching Coach Buzzcut reports to Principal McVicker that he can't even find a leak down there (confusing Beavis, who knows there was one: "I took it.") When McVicker confronts them and they cry out it was an April Fool, pissing off everyone (except Stewart), McVicker finally expels the two... Only to change his mind when the lads find that "COOL!" and realise they can now spend all their time doing pranks.

McVicker rapidly unexpels them and sticks them in detention with a screaming Buzzcut instead. As they listen, Todd appears at the window to inform them that even though he was stuck in prison, he won't be beating them to death after detention... "APRIL FOOLS!"

Beavis and Butt-head return to class from the principal's office, deciding to get sent there the next time they have a test too - as they come in, classmate Kimberly has finished inviting everyone to her party tonight. Van Driessen gently asks if she wants to tell Beavis and Butt-head what they missed hearing ("if it's homework or something I don't wanna hear about it"), and that she can't invite everyone except two people. Reluctantly, she invites them. That night, they eagerly head out to the loud, boisterous party to score, but when they get their Kimberly claims the party hasn't started yet and they couldn't make out with her even if they had a million dollars. Butt-head grumbles that now they have to find more than a million dollars...

Daria explains it off-panel, and they head for the house to tell Kim they know they've been tricked and Butt-head threatens to tell Van Driessen if they're not let in (Beavis asks "is he at the party too?"). They stare in awe at their first sight of a party, while everyone else stares in disgust (except Stewart) and Daria just looks bored. They spy a Spin the Bottle game and assume it's wussy until they notice if the bottle points at you, a chick has to kiss you. "Dude, this is the coolest game ever invented!") They insert themselves into the game, causing all the girls but Gina to flee.

Gina stays only because jock Tommy promises the bottle won't point at Beavis and Butt-head - and as the two fight over who the bottle will point at first, he covertly points it at himself. (The lads are not sure but believe that's against the rules) They cheat and try to hold it pointing at Kimberly, who "accidentally" breaks it (and has to explain to them it wasn't an accident). Booted away, the two find another bottle and carry on with the game. Butt-head looks at the two of them playing without any chicks and figures "something's wrong here or something", but on they play (Beavis thinking "STARING AT SPINNING BOTTLES RULES!"). The bottle will only point at them though, so they don't count that round... unfortunately, they do count the round where Beavis spins the bottle and it points at the toilet. "Spin the Bottle sucks!" 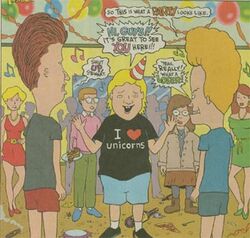 Retrieved from "https://dariawiki.org/w/index.php?title=Beavis_and_Butt-head_issue_16&oldid=26310"
Category:
Cookies help us deliver our services. By using our services, you agree to our use of cookies.