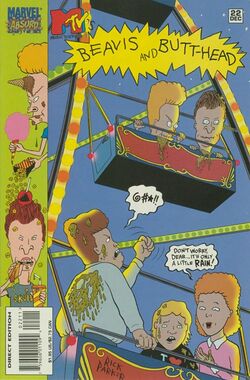 Beavis and Butt-head are gleefully in line for Bloechunk's Amusement Park, only to discover they have to pay to get in. The concept pisses them off, Beavis suggesting they need to go buy some money, and security boots them away. That's when Butt-head finds something cool: a hole in the park's fence. "Heh heh! It's really cool you said hole! Heh heh heh heh!" "Yeah! Huh Huh! And now you said it! HOLE! Huh huh huh! I just said it again!" A long minute later, Butt-head realises they can use the hole to, like, sneak into the park without paying. However, they're caught by a staff member, Beavis blowing Butt-head's lies that they weren't sneaking in by loudly bellowing what a great way to get in without paying it is. The lads soon find themselves chained up and forced to sign a contract saying they'll never come back (Butt-head asks if that's so they won't get beaten up, and is told it's before they're beaten up). 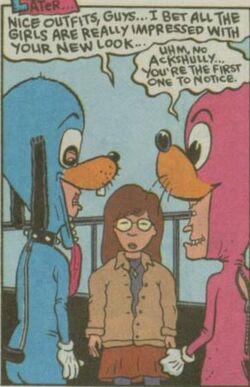 Things take a sharp turn when the park mascots quit, and none of the remaining staff want that crummy job. But as they're wondering who'd be dumb enough to take it, Beavis stares and goes "WHOA! THOSE COSTUMES RULE!" Swiftly, the lads are hired and the draconian rules laid down, with both of them thinking it's just like Halloween ("Later, we gotta go TP Anderson's house!"). Unsurprisingly, they utterly suck as mascots, proving incapable of properly greeting anyone, and causing girls to note this is the first time they felt sick at a park before going on rides.

Todd Ianuzzi and his mate also come along to enjoy one of their favourite park games, beating up the mascots...

Post-beating, Butt-head theorises welcoming dudes to the park isn't working, so maybe they should start scaring them away. He uses shaving foam to make his dog costume look like it's got rabies, while Beavis... marks his territory. Daria watches silently, while two large dudes decide this cannot stand at a family park and give chase. Beavis and Butt-head flee for their lives... onto the roller coaster Todd was in line for, spilling his drink. This leaves them trapped on a roller coaster with Todd and his minion, who vow that for these insults, they're going to get a beating ("before we were just beating you up for no reason"). Todd holds up Beavis so he can 'read' the sign saying to keep your head down to avoid injury ("Thanks, Todd") and soon beats them in a fury, disgusted at the idea chicks might see him doing that and think he was hanging with the duo (Butt-head apologises for this). The ride ends too soon, so Todd says they need to go on it all over again... ("To see what happens when they ride the same coaster again and again, just keep rereading this page. - Editor")

Post-coaster, the lads ask if they can hang with Todd, who tells them he'd beat them up if he wasn't so tired of beating them up.

By this point, Beavis and Butt-head have so sickened everyone at the park that nobody wants to talk to them. Just as Beavis is complaining about this, Stewart (soaked by the log flume) turns up to talk to them, who tell him to shut up - they're not going to hang with him, they're going to finally have a go on the rides after the park closes. Stewart points out this won't be possible with the power turned off, but they ignore him... and after the park is closed, Beavis is pushing the roller coaster cart up the track. "Riding roller coasters is hard work!" "Huh huh. You said hard."

The lads are celebrating Columbus Day, which is an awesome day because you get let out of school and don't have to play hooky! Mr. Van Driessen hopes they're having an enriching and educational Columbus Day: "Uhhh, no". The lads note Columbus was a dumbass, Beavis stating "it's like, most dudes on TV are smart, but he just goes around in a raincoat asking stupid questions after some dude gets killed". Van Driessen explains the difference between Columbo and Columbus, giving a potted history of the discovery of the Americas. Butt-head is inspired: if they discover something, they'll have a holiday after them and get off school! Maybe dudes will have to take tests about them! Beavis thinks that sucks, until Butt-head points out if it's a test about them, "we'd probably know the answers to some of the questions". Beavis is stunned.

The lads run through a list of things they could discover, Butt-head vetoing discovering a country because it'd be full of foreigners. They stare into a estate agents, thinking about discovering a prison ("then we could live there"), when a grumpy Butt-head says he's just discovered Diarrhea. ("...me too..." says Beavis, looking at his pants) 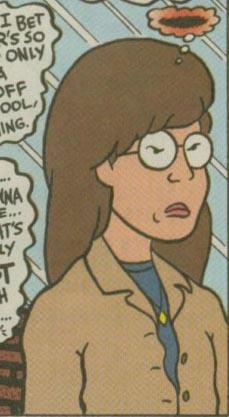 Daria storms off in a rage, while Butt-head explains to Beavis that he already discovered his wiener years ago and it's so small he'll only get a minute off school (Beavis thinks that'll be long enough...). He then decides to discover his nads, because they're round like that Columbo dude said (they become flat when Butt-head kicks him).

They get in Todd's way while Beavis suggests discovering "being cool", and Butt-head points out there've been cool people like Todd before Beavis. They see Todd and ask him why he doesn't have a day off school, and they're awed when he explains he never goes to school because he left it years ago. "You are so cool, Todd!" They try to get him to help them discover something, but he beats them up for touching his car. Their battered forms are discovered by Stewart in a Spanish sailor costume - Beavis wonders why discovering cool stuff is hard but it's too easy to find Stewart. Misunderstanding his talk about the Pinta, Nina, and Santa Maria, they decide to go discover chicks.

The first chicks they find beat the snot out of them. Butt-head believes this is because they saw them near Stewart and thought they were his friends. Giving up and declaring Columbus Day sucks, they decide to just go home and watch the TV. That's when it hits Butt-head: they can discover TV! Beavis wonders why nobody did before - "'cause people are stupid, dude!". 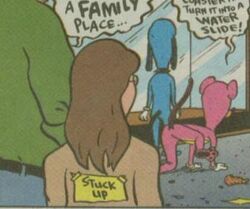 Highland is such a lovely place.
Retrieved from "https://dariawiki.org/w/index.php?title=Beavis_and_Butt-head_issue_22&oldid=26371"
Category:
Cookies help us deliver our services. By using our services, you agree to our use of cookies.