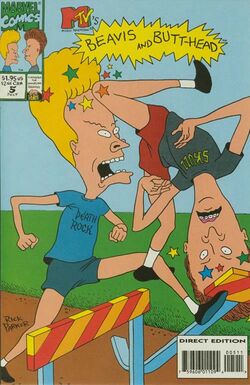 Beavis and Butt-head are setting up the equipment for Highland High's Track and Field Day, and have managed to "accidentally" hit Principal McVicker in the nads with a barricade. As he limps off and the duo cackle about it, Coach Buzzcut tears into them: in an act of sympathy, Highland put the duo with the "shop students" doing menial tasks, but they've proven "too DUMB for even our stupidest class! Doesn't that BOTHER YOU?! ...DON'T YOU WANT TO JOIN THE HUMAN RACE?!" "Uh... no?" Buzzcut retreats in disgust, while Mr. Van Driessen congratulates the duo on the "unique" (crappy) way they've erected the barricade. He gives them a big speech about how they can use sport as a bonding experience, causing Beavis to wonder what it all means and have Butt-head tell him "I dunno, I wasn't listening".

Van Driessen rallies quickly and tries to get them to join in the long jump... where they not only suck, but Butt-head forgets to let Beavis leave the area before he jumps and lands bum-first on him. An enraged Buzzcut gives them one last chance: the discus ("Dis-sucks huh huh!"), which Butt-head manages to whack McVickers in the nads with. Buzzcut screams at them if they know the importance of physical fitness ("NO!") and challenges them to kick him to see how tough a man can be... causing their untied shoes to hit McVickers again. Realising he'll beat them for this, they beat it ("huh huh you said beat it") and flee as fast as they can... down the race track...

The boys flee to hide in the bathroom, not realising they've won the race. The teachers go to retrieve them ("several flushes later") and Van Driessen hands a cup to Butt-head, saying how proud he is. McVickers shakes hands with Beavis, a look of growing horror as he's told "I just spanked my monkey"... 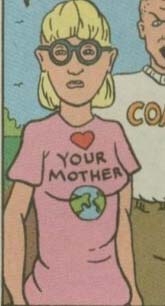