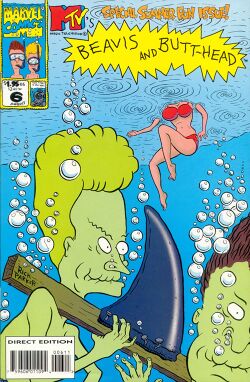 Beavis and Butt-head #6 was the July 1994 issue of the Beavis and Butt-head comic. All strips and features were drawn by Rick Parker (art and lettering), with the writing provided by new team Sam Johnson & Chris Marcil and colours by Rob Camacho; Glenn Eichler was consultant.

The duo are joining in the Highland 4th of July fireworks display, and helpfully painted "SUCKS" on neon "1776" sign.

Mr. Van Driessen wonders if fireworks are a bit too dangerous, as Principal McVicker fires off one that comes hurtling down onto Beavis and Butt-head, knocking them unconscious. When they wake up, they're in the year 1776 and the Declaration of Independence, where the Founding Fathers all resemble people from Highland. Butt-head recognises "that dollar bill dude!" and theorises there's a "Resident's Day Sale" on. They start snickering their way through the declaration ("Heheheh. Dependence") and Butt-head realises, after a while, they've gone back in time... "We've gone all the way back to... 'NAM!")

Butt-head tries to join in the revolution but ends up mooning everyone, and the idea that these are the Americans of the future is so horrible that Benjamin Franklin decides to give up on revolution after all and go back to kite flying. This, of course, leads to the two delinquents getting electrocuted and they wake up in the park; Beavis is annoyed that now they'll never know who won the War of Independence!