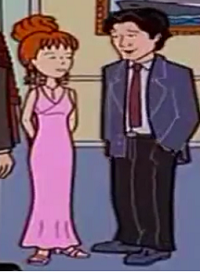 Brent is one of the more popular guys in Lawndale High, as per "Just Add Water". Quinn wait-listed him in case her date Rex fell through, but Sandi picked him up and waged passive-aggressive social war over it - a doomed endevour, as Brent preferred Quinn and dumped her in front of the whole school precisely after the Princess Fairy sunk. He'd already been sniffing around Quinn claiming he couldn't believe anyone would stand her up, ignoring that Sandi will glaring daggers at him across the room.

He may or may not be more popular than Rex.

Retrieved from "https://dariawiki.org/w/index.php?title=Brent&oldid=26889"
Category:
Cookies help us deliver our services. By using our services, you agree to our use of cookies.