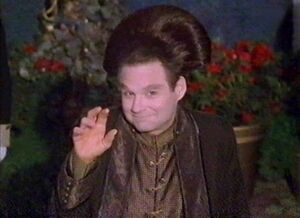 Since he began writing and posting Dariafic in 2001, Brother Grimace has started his own personal tradition of a annual release of Daria fics over the Thanksgiving holiday (either a major release of several fics, the conclusion of a major work (as with the completion of Legion of Lawndale Heroes, Volume Two in 2009), or the release of a single novella- or larger sized fic. He usually posts the fics on the weekend before Thanksgiving; he once joked that he did this so that Daria fans could have something to read after dinner.

At the time of TSWCOT's initial release, in June 2000, such a view of Daria and her world was considered almost heretical, and many fans maintained a slight resentment towards the author because of these works that is still slightly present in the fandom. This could be considered ironic, as Brother Grimace's works almost always contain sequences where characters within, including Daria, undergo near-religious moments that allow them to experience relevant and positive insights and changes, as well as surprisingly positive themes and upbeat endings. Examples include "Victory Lane," where Jane fully embraces her sense of freedom after meeting a Daria seemingly entombed within her own enforced desire to be perceived as "one of the crowd."

Brother Grimace's fics tend towards prose, and are considerably longer than the average Daria fanfic. At present, two of his works - the unfinished "It's All About Respect" and a Dariarotica work " - are among the largest stand-alone works in Daria fan fiction history. (Steven Galloway's epics, "Revelations" and "Visitation," are the largest stand-alone works.) He also tends to use very descriptive prose (most famously parodied by TAG in The Original Underground Government-Suppressed Version of Brother Grimace’s Classic Daria Fanfic, "The Sun Will Come Out, Tomorrow" ), and uses a great deal of background information on his characters, as well as much internal dialogue.

Some Daria fans see Brother Grimace's writing style as 'over-the-top' - that is, primarily skewed towards melodrama, generally unrealistic premises and story lines, and that most of his fics are written that way. (In one notable instance, Kara Wild held an Iron Chef challenge in which she challenged him to write a 'down-to-earth' fic while she wrote an 'over-the-top' fic. The fics written were A Slice Of Pizza and They Came from Planet Xulfanex.) While a number of his fics do fit in that mold (most famously Another Stupid Daria Internship Fic and a number of his entries in the Evil Daria Viginettes), the majority do not.

A New Take on Veronica?[edit]

In "The Trouble With Veronica," Brother Grimace developed Robert Nowall's original character of Veronica into a character beyond a mixing of Quinn and Daria's physical, mental and social traits. This character later morphed into her own independent character, Evelyn Veronica Morgendorffer.

Due to sexual themes, violence, and language, his fics tend to lean to 'R-rated'.

Retrieved from "https://dariawiki.org/w/index.php?title=Brother_Grimace&oldid=29324"
Categories:
Cookies help us deliver our services. By using our services, you agree to our use of cookies.