“Cafe Disaffecto” was the fourth episode of the first season of Daria. The title is sometimes written as "Café Disaffecto," but the accent mark over the e was not present in the episode title on the show.

In this episode, hilarity ensues when Daria, Jane, and Quinn are coerced into raising money for a new student coffee house, and Daria is asked to read a story on its opening night.

A computer is stolen from "alt.lawndale.com", the student cybercafe in Lawndale. English teacher Timothy O'Neill mentions this in class for discussion, as a break from Romeo and Juliet. Kevin fails at expressing his feelings on the theft and vandalism...after first denying having anything to do with it. Jodie feels angry about the robbery, though she admits the cafe served a limited clientele. Daria mocks the teacher's statement about being cut off from the "virtual community", stating sitting in a room staring at a computer screen and not talking to anybody for hours doesn't constitute a community. Misunderstanding Daria's comments, O'Neill decides to reopen the establishment as a more traditional coffeehouse.

At Schloss Morgendorffer Daria, Helen and Jake talk about extracurricular activities. Helen insists that Daria do something outside of school, so that Daria can include it in future college applications. She ends up convincing Daria to look for an activity by threatening to send her to Music Camp (an activity Daria detests). Daria argues that colleges care more about whether prospective students can afford tuition (and Jake proves no help to Helen's argument) but Helen is not to be dissuaded. Daria ends up volunteering for the coffeehouse, choosing to raise funds instead of performing on stage. She convinces Jane to join her by finding a reason she would accept - namely, the chance to see inside houses and make fun of people's tastes.

Other students are also involved in fund-raising: Kevin and Brittany try to sell wrapping paper, magazine subscriptions, CD's/cassettes, and flower seeds to Anthony DeMartino, who refuses to buy anything on the general principle that he does not want to underwrite further student indolence. Quinn uses her feminine wiles to convince/ manipulate a guy named Danny into buying long-distance phone cards.

Daria and Jane sell chocolate bars door-to-door. Their first client is Mrs. Johannsen, an obese woman who is short of breath and who faints while talking to them. When Mrs. Johansen insinuates that she is forbidden to eat chocolate by her doctor, Daria refuses to sell her any bars, despite the woman's pleas to buy their whole supply. Back at school, Principal Li reprimands the two students for not having sold anything and having refused to sell to a willing client, despite Daria's explanation of Mrs. Johansen's medical condition. Fortunately for them, the lack of money from the aborted chocolate sale is compensated by the huge success Quinn has in selling phone cards.

Unfortunately, Daria still has no credit for the coffee house opening, so she agrees to read at opening night. After considering and passing over several of her old stories, she decides to write a brand new one. 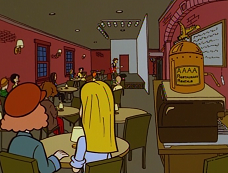 The opening night comes, and the coffee house (called Café Lawndale) has several performers: a male rock musician sings some lines before destroying his own guitar on stage; Brittany and Kevin attempt to do Romeo and Juliet's balcony scene; Andrea reads some lines of her poetry. Finally, Daria reads her new story, a spy thriller presenting the female secret agent Melody Powers. The originally disinterested audience slowly warms up to Daria's story and bursts in applause and cheers at its concluding.

The following day, at breakfast, Jake reads in the newspaper the side effect to the success of Daria's story: some Lawndale Lions had formed an anti-communist rally and had attempted to stone the Russian embassy (despite the lack of one in Lawndale), forcing the closing of the Café Lawndale. Daria calmly notes that she's already got her extra-curricular credit and they can't take it away - now she just needs to keep an eye out for the next time her parents try to make her do one...

The episode concludes with the robbery of Café Lawndale that night.

This episode had a major effect on fanfiction when it was discovered that a seating chart for Mr. O'Neill's class, shown in closeup, revealed the first names of every student in the class, including nameless "backgrounders". From this, it was deciphered: 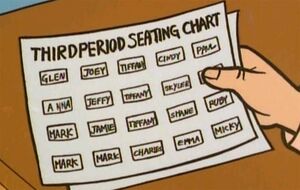 Kelly and Tania are seen sitting together later in the same episode. Les and the black Jennifer later resurface as part of the Lawndale High Track Team.

The seating chart for a freshman class is also shown. As well as the Three Js, Tiffany, and Skyler, we learn there's:

The class must have changed at some point, as we later see Quinn, Stacy, Sandi, and Corey are in the same class as Tiffany and the Js. Shane and Cindy are named after Daria staff that they've been modelled on; Ruby may be the background character "Sour Red" (cos she's a redhead innit).

Throughout Kara Wild's Driven Wild Universe series, Cafe Lawndale undergoes several changes. In "The Tie That Chokes," it returns to being a student coffee house, with the added presence of armed security. In "Erin the Head," Cafe Lawndale has closed altogether and has been turned into a new "happening" venue called the Metreonopolis. Finally, in "Into the Fire," we learn that the Metreonopolis was shut down and turned into the more tasteful, sedate Café Brunoli, which caters to older clientèle. In each case, with the exception of the last one, disaster befell the café just as it did in "Cafe Disaffecto."

In "Can I Just Have The Coffee?" Daria is convinced for different reasons to read a story at the coffee house, with John Lane egging on the near-rioting football players.

In "Esteem Roller", by Legendeld, Quinn recites a poem accompanied by her fellow skaters, and Daria reads a story she had written (with some spy themes, as in the canon version). Both get a good response from the audience.

"Grove Hell 2: All the Lawndale People" has Li repeatedly re-opening the cafe in the hope of making a profit from it. Daria was not in Lawndale for the original opening but performs for its fifth, again doing something deliberately designed to get at the teachers.

In "Blood Oath of Patriots", Daria had written Melody Powers to try and help O'Neill, tailoring her writing for the audience. She was secretly hurt by his reaction.

In "It Slipped Through My Hands, Like a Shadow, Like a Dream", Quinn is delivering chocolate and sells a large amount to Mrs Johansen. As a result, the woman dies.

In Quinn's Code, There is a discussion/debate at the Coffee House between Sandi and Quinn about whether geeks should be accepted as popular people, which Quinn wins. (Daria presents the Melody Powers story as a Metal song.) The Coffee House remains open.

As well as the Melody Powers story "Where the Future Takes Us", Daria has written:

Whether they're short stories or essays are unknown.

alt.lawndale and alt.coffee logos, as first noticed by It Really Makes You Think podcast.

This is the first canon appearance of Melody Powers. This fictional-character-within-the-series would get a strong backing and response by the fandom.

The episode was not part of the first half of the Daria Day marathon to open Season 2. Jane said it was not airing for "complex technical reasons" - "They lost the tape," said Daria - but it later aired after everything else and another "College Bored" rerun.

In 2000, MTV created a Virtual Lawndale website feature - which said the cafe has been closed down ever since this episode!

O'Neill states he identifies with Daria's essay about being a "misfit whom everyone hates"; in "The Daria Diaries", he would say Daria reminds him of himself as a child...

Jane asks Daria is she knows CPR and Daria implies she doesn't. In "Water Safety" she was shown how to perform CPR, which is either because Glenn Eichler wasn't taking that Beavis and Butt-head episode as canon (real world answer) or because Daria panicked or was otherwise afraid/reluctant to try it on Mrs Johanssen (in-universe answer).

The provider of the coffeehouse equipment is shown to be AAAA Restaurant Rentals, as their name is shown on the coffee machine stolen at the end of the episode.

In "Boxing Daria", she states she started writing violent revenge fantasies at age 15 "just to get a reaction": her Melody Powers story is not an isolated incident, but something she's been doing since Highland High (though her parents don't seem to find out about this one).

This was part of the Sarcastathon 3000 marathon, and Jane got in a mean dig about the show being "buried... under the maggot-ridden piles of Road Rules reruns", one of several off-canon canon digs at Daria's MTV sister shows.

The original name of the student coffee house, alt.lawndale.com, was later used as the name of Katherine Goodman's Daria fandom website that claimed to be the third unofficial Daria site created. The site is no longer maintained or updated.

Retrieved from "https://dariawiki.org/w/index.php?title=Cafe_Disaffecto&oldid=29567"
Category:
Cookies help us deliver our services. By using our services, you agree to our use of cookies.