"Camp Fear" was the fourth episode of the fifth season of the television series Daria (episode number 504). It first aired on MTV on March 12, 2001.

Both Daria and Quinn receive invitations to attend a reunion at Camp Grizzly, the summer camp that both girls had attended years ago. Daria, naturally, wants nothing to do with it -- she has plenty of bad memories about the place -- but Helen convinces her by saying that if she doesn't want to go, she can help them with a weekend of garage cleaning.

Daria is offered a ride to the camp by Jane and Trent, the latter experiencing creative burnout and is thinking of breaking up the band; a day trip to the country just might give him the inspiration he needs. Unfortunately, they have to bring Quinn as well, who naturally complains non-stop during the drive there. At the camp, Quinn (who had them drop her off out of sight of the others) meets up with three of her old friends from camp, Tracy, Cindy, and Tatiana -- who are exactly the same as the Fashion Club -- while Daria experiences a bittersweet reunion with Amelia, a fellow camper who obsessively idolises her, and Skip Stevens, the self-proclaimed "camper's camper" (read: obnoxious dictator).

After being mistaken by Skip for people from a rival camp, Jane and Trent take off for a country adventure, and boy, do they ever get one: they meet a country bumpkin couple who makes their own snacks. Jane doesn't want to have anything to do with it, but Trent inexplicably accepts their invitation to their house, thinking that he can get some inspiration from these people. He eventually realises they're talking crap but at least it causes him to regain his muse, as he makes up a song about how lame they are.

Meanwhile, the campers endure Skip's over-the-top enthusiasm during a nature hike and a cookout, while Daria ignores the festivities and does her own thing. Amelia decides to hang out with Daria, and annoys Daria when she tries to reminisce and turns out to remember things quite differently to Daria:

Amelia: This reminds me of the time you boycotted the End-of-Summer campfire by the lake. That was so cool.

Amelia: Oh. (pauses, then laughs) Remember the time you took off on your horse and left us all behind.

Daria: You mean the time the time the horse ran off with me on it and tossed me in the river, and I had to have nine stitches?

Amelia grows to regret hanging with Daria as the girl's sarcastic and cynical nature causes her to toss out some caustic commentary on Skip, the whole camp experience in general, and, finally, Amelia herself, whom she accuses of being a blind follower. Upset and hurt, Amelia accuses Daria of being a bitter person who doesn't like anyone, a charge that hits very close to home.

Speaking of home, Jake and Helen are busy all this time, cleaning out the garage and arguing about how Helen's constant need to work keeps interfering with their plans. They make up, however, when Jake finds a sexy nightgown that Helen had hidden for one of their trips: one cancelled because of his work.

Back at the camp, Quinn manages to alienate her old friends by accidentally revealing that she had snuck off with Tracy's date back when they were at camp. Finally, as Skip continues to annoy everyone, Amelia snaps and makes a heartfelt speech about standing up to Skip's dictatorial ways and doing your own thing, saying that while Daria's unpleasant, antisocial, and ignorant of other's feelings, "at least she thinks for herself" and Amelia's going to start doing that too. Angry and embarrassed, Skip appeals to camp director Mr. Potts, who points out the blindingly obvious: it's just a summer camp, and he shouldn't make it the sole focus of his life. (Skip bursts into tears)

Daria and Amelia patch things up just as Jane and Trent arrive. Having bombed out with the old couple, Trent finds some consolation in joining Jane to tease Daria about her "secret popularity," and during the drive home, Trent, after reflecting on the events of the day, finally gets his inspiration back. Jane mentions that they seem to be forgetting something, and Daria informs them that Quinn found another ride home... with Skip. Who won't stop talking to her, and on top of that, has learned absolutely nothing from Amelia's criticisms towards him.

In a flashback to her time as a young camper at Camp Grizzly, Daria is shown with a copy of George Orwell's Animal Farm. At the camp reunion, she reads Cormac McCarthy's Blood Meridian.

Two fans of Daria won a contest to become characters on this show: Michelle Klein-Hass and Erin Mills.

The title is a play on Cape Fear, a film first made in 1962 starring Geogory Peck and Robert Mitchum and then remade in 1991 by Martin Scorsese and starring Robert De Niro and Nick Nolte. (There is also a 1991 low-budget horror film having the very same name as the episode.)

A popular theory is that Amelia is meant to be a satire on Daria fans: overly idolizing her and wanting to be mates, getting disillusioned that Daria turns out to be flawed and a bit unpleasant, and annoying the hell out of Daria who can't stand being fawned over.

Quinn's friends and admirers at camp are dead ringers for the Fashion Club and the Three Js, and she treated them the same as she treats her Lawndale friends.

Jane didn't go to summer camp but did have to stay at communes with her parent's friends.

Quinn has been calling Daria "my cousin" for five years.

Camp Grizzly is close enough to Lawndale for everyone to go there and back in a day, and Quinn can ask for a lift home from other campgoers. This is a bit strange, as the Morgendorffers were living in Highland when Daria & Quinn first went to Camp Grizzly and that's a good distance from Lawndale (Texas to be precise). Jonathan Greenberg may have been unaware of this. 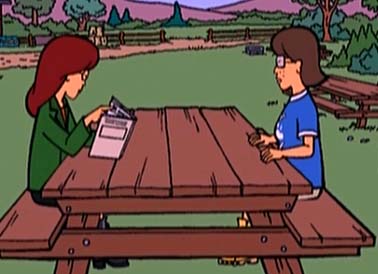 The Angst Guy wrote a continuation of Amelia's experiences on the camp reunion day in "Prisoner of Hope." Kristen Bealer filled in the young Quinn's escapades and how they'd shifted her towards her canon persona in "The Tween Queen of the Camp", as well as what happened to young Daria after not being invited to the End of Summer campfire in "Country Wisdom" and an alternate universe where Trent goes to the camp instead in "Camped Out".

Alternate universe versions of Camp Fear include John Lane story "Friends and Rediscovery" by RLobinske, a section of "After the End by TAG, Not So Different 57: Second Wind by J-D. AU versions of Daria's time at camp include "The Misery Chicks" by NightGoblyn, "Who Once Was Lost" by TAG, and "Rio Grizzly" by Smileyfax.

The unfinished comic "The camp we used to fear" by Wouter Jaegers is a sort of follow up story, In which Amelia takes over the camp from Mr. Potts and as such grows as a person, certainly when a boy named Link shows up after having been volunteered by his father to work as a camp leader. Amelia is taken in by Link because he reminds her of Daria.

Amelia has also been taken up as a supporting character in multiple fanfics.

Retrieved from "https://dariawiki.org/w/index.php?title=Camp_Fear&oldid=27969"
Categories:
Cookies help us deliver our services. By using our services, you agree to our use of cookies.