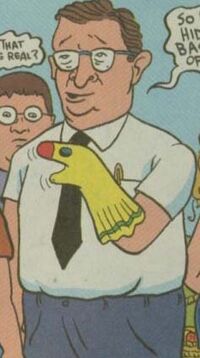 Clark Cobb is the manager of Cobb's Hardware in Highland, and head of the town's Christian Businessmen's Association. He's a parody of televangelists and voiced exactly like H. Ross Perot.

While Cobb is nominally pious and wholesome, he shows more interest in looking pious and wholesome for the sake of business: in a Halloween story, he's running a haunted house to benefit the Association's "juvenile delinquent re-education center" and berates the kids because they're not performing well enough for the local news media.

He is seldom seen without his lame sock puppet called "Socko" which he will use to 'help' teach his televangelist lessons. Horrifyingly, both Stewart Stevenson and Dean Zunker like Socko. Butt-head, however, wisely noted in "Walkathon" that "Socko has a hand up his butt."

Cobb has been involved in a number of community initiatives, many of them involving Highland High students; it appears there's an official relationship between the school and the CBA. Of course, that means his initiatives keeping running afoul of Beavis and Butt-head. His haunted house had no involvement with the school but still turned into a juvenile riot when they turned up.

Daria Morgendorffer was involved in three of Cobb's schemes:

Daria didn't seem to think much of Cobb and his works: in "Time Cap", she mouths off about the project, and in "Walkathon" she's giving the man and Sock a very sarcastic clap. She went out of her way to mess up part of the walkathon with her trick (Cobb didn't seem to realise this).

Retrieved from "https://dariawiki.org/w/index.php?title=Clark_Cobb&oldid=28581"
Category:
Cookies help us deliver our services. By using our services, you agree to our use of cookies.