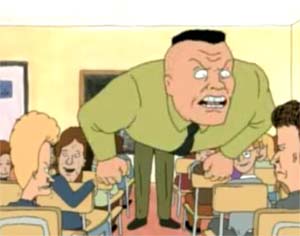 Buzzcut faces down Butt-head ("No Laughing")

He was a VERY LOUD, overbearing, drill sergeant type. He used to be a US Marine during the Vietnam War and believes the war was lost because of the hippies at home. Sport and physical ability is taken very seriously by him, and he was driven to anger when two football players wanted to put learning above playing football ("Go Highland"). (He does not seem to value academic achievement at all: in non-Daria ep Young, Gifted and Crude, Buzzcut incites the class to beat up a student from the gifted class!)

In the episode "No Laughing", Buzzcut was in charge of sex education for Daria's class. His only significant interactions with Daria from his POV was "Water Safety", where he handed her his clipboard and whistle so he could save Beavis and Butt-head from drowning, and the not-quite-canon strip "Science X-Periments" where she helped him get Beavis & Butt-head to hurt themselves. 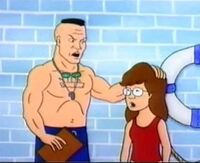 Among the rest of the faculty, his only significant interactions are with Principal McVicker and Mr. Van Driessen. He's an ally of McVicker and has assisted him against Beavis and Butt-head, and in "Wet Behind the Rears" the two collaborated to humiliate the buttmunches in front of everyone. Van Driessen and Buzzcut don't get on at all due to their different temperaments and views, though they rarely get explicit about this.

Buzzcut is constantly running afoul of the demented duo of B&B, and every attempt to get them to do anything useful in class - "Field Day", "Go Highland" - has been a horrific disaster. In "Water Safety", they almost died in his swimming class, forcing him to save them (or he'd lose his job). He has grown supremely enraged by the idea of putting up with them: in "Sporting Goods", he deliberately has them play volleyball so he has an excuse to hurt them with a ball; "Wet Behind the Rears" sees him deliberately targeting them; and in "Beavis and Butt-head are Dead" he says it took every inch of his self control not to kill them.

Retrieved from "https://dariawiki.org/w/index.php?title=Coach_Buzzcut&oldid=15729"
Categories:
Cookies help us deliver our services. By using our services, you agree to our use of cookies.