At the Morgendorffer residence, the family gets up to start another day, full of optimism and joy for the day ("Morning in the Burbs"). Even the announcement of a possible hurricane in Lawndale does not get their spirits down.

At Lawndale High, during lunchtime, Brittany mentions in passing that it is Pep rally day, prompting Daria and Jane to make plans to spend the afternoon at the roof. During the pep rally, however, Ms. Li anxiously informs the staff and students present that the hurricane is confirmed and heading in their direction: the game is cancelled and all must go home. Students and staff leave the school wondering how Lawndale and their lives could be affected by the storm ("If the Town Blows Away").

At the roof, Daria reads the news of the coming of the hurricane in the newspaper and she and Jane also speculate on the consequences of its passing ("If the Town Blows Away"). On their way out they meet Kevin and Brittany, who had sneak out of the gym to make out. After convincing both that the hurricane is real, they get stuck on the roof when Kevin inadvertently lets the stairs door close. They then lament over the fact that they are probably going to die ("If the Town Blows Away"). 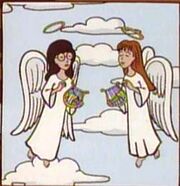 Jake is also coming home, driving and trying to call his house. The despair over the lack of answer and the traffic makes him drive recklessly and hope that both his daughters are safe ("Gah, Gah, Dammit!"). When he arrives, he finds Quinn and Helen preparing for the hurricane. As none of them knows Daria's whereabouts, they call the Lane's and Helen insists for Trent to come and stay with them for the storm's duration.

Daria, for her part, is still struck at the school roof with Jane, Brittany and Kevin. For lack of a better option, they decide to hide in a small shack on the roof. While inside, all think and sing about their respective families and how they must be worrying about them ("They Must be Worried").

At the Morgendorffer's, Trent has arrived and all are enjoying some cocoa. Jake laments his usefulness over not being searching for Daria. As Helen intervenes, pointing that it's no use playing superman and going outside with the rain and wind, Jake snaps, saying that, in an emergency, a thought man is necessary ("Manly"). In a show of bravado, Jake and Trent leave to search for Daria and Jane. Unfortunately, they quickly crash the car. 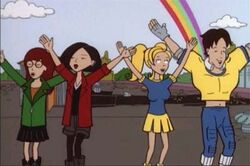 Meanwhile, the shack on the school roof is slowly falling apart, so the four inside decide to leave before it breaks down completely. As the door is stuck, Kevin strikes it down, prompted by Brittany, Daria and Jane ("Manly"). When they leave the shack, lo and behold: the storm has passed and a clear sky with a rainbow greets them! The four sing and dance with the joy of having survived the hurricane ("The Big Wet Rainstorm's Over"), a song that is also sang by other of Lawndale's inhabitants: The Fashion Club, happy that they can shop once again; Mack and Jodie, depressed that Lawndale has stayed the same; the Trike Girl; Jake and Trent, who recuperate while Jake rants about the car accident.

As Jake and Trent leave the car, they meet Daria and Jane (who presumably walked home). All greet and embrace each other enthusiastically and are soon joined by Helen and Quinn, also happy they are all right. Daria then breaks the fourth wall and comments to the audience the strangeness of the day and the hope another weird day will come. All Lawndale citizens then join them, singing about the next morning in Lawndale ("Morning in the Burbs").

MTV's "Making of" clip of the Daria! episode[edit]

Retrieved from "https://dariawiki.org/w/index.php?title=Daria!&oldid=29394"
Category:
Cookies help us deliver our services. By using our services, you agree to our use of cookies.