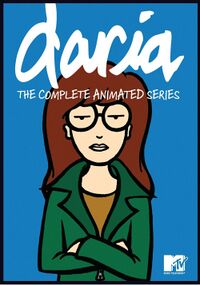 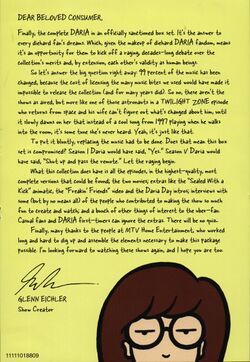 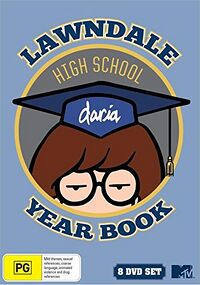 While the fandom is divided on how much they tolerate this (many having fond memories of the song clips), most of the new music is fitting and does not seem out of place, aside from a few pieces (the music playing during Daria's 'incarceration' in "The Big House" is barely there). There are three episodes where the different music undermines a joke: the reference to the R.E.M. video "Everybody Hurts" in "Road Worrier" ("this is just like that REM video"), the various TV themes in "Murder, She Snored", and Daria and Tom responding to high-pitched loud lyrics that simply aren't there in "My Night at Daria's" (it was originally "Crash and Burn" by Savage Garden).

Pilot: Sealed with a Kick[edit] 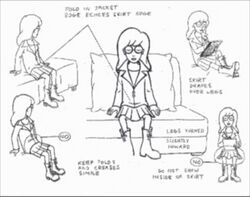 Retrieved from "https://dariawiki.org/w/index.php?title=Daria:_The_Complete_Animated_Series&oldid=29302"
Category:
Cookies help us deliver our services. By using our services, you agree to our use of cookies.