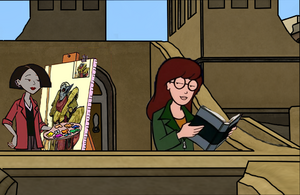 The important things stay the same

Daria in Morrowind by WellTemperedClavier is a series that re-imagines the show but takes it out of the comfortable suburbs of Lawndale and places it within the murky world of The Elder Scrolls III: Morrowind. Here, Daria's an Imperial girl who's just arrived in the dusty city of Balmora, trying to navigate a society that's a lot weirder than home but still reassuringly corrupt and hypocritical.

Please note that only Outlanders will get an individual entry on this Wiki. There are a lot of stories here, and I (WellTemperedClavier) want to avoid clutter. Outlanders gets an entry since it's notable for winning Favorite Crossover in the 2018 Daria Fanworks Awards.

In May 2021, Daria in Morrowind joined the ranks of other completed crossover Daria fanfic series.

This series includes the following stories:

Stories in the Series[edit]

1. Outlanders - Can Daria survive in a world where snarking to the wrong person might actually get you killed? And where bugs are considered haute cuisine? Read and find out! A re-imagining of Esteemsters.

2. On the Origins of the Fashion Guild (single-chapter) - About Quinn's social recovery after things fall apart with Sandi Griffin.

3. An Invitation - Daria is forced to attend a party, which is just as dreadful in Balmora as it would have been in Lawndale. A re-imagining of The Invitation (along with elements of other episodes).

4. The South Wall Cornerclub (single-chapter) - Introduces Trent Lane, and has the eponymous cornerclub standing in for The Zon.

5. The Guilded Age - A volunteer push sees Daria saddled with an unwanted position at the Mages Guild in spite of her not really knowing any actual magic. Draws elements from College Bored and Cafe Disaffecto.

6. The Artist's I (single-chapter) - A story examining how Jane approaches commissioned art in different ways for outlander and native clients.

7. The Pilgrim's Inertia - A close brush with death inspires Jane to choose the easiest possible religious pilgrimage she can take. Daria comes along, mostly to get out of the Morgendorffer house. This story takes inspiration from Groped by an Angel and Road Worrier.

8. Hate Actually - This story follows Quinn to an Imperial celebration where she has a run-in with this universe's version of Tommy Sherman. It's basically the events from The Misery Chick re-imagined from Quinn's perspective. Oh, and set in Morrowind.

9. The History Girls - In trying to avoid a noxious history (read: propaganda) assignment glorifying the Empire, Daria ends up even more deeply involved. Though not based on a specific episode, it does take elements from Partner's Complaint (specifically, Daria working with Jodie Landon and being confronted with some of the benefits she gets from being white/Imperial).

10. The Worst Years of Our Lives - A couple of Jake and Helen's friends from Jake's old Fighters Guild days come in for a visit, and turn out to be pretty obnoxious house guests. Daria tries to figure out a way to get them out of the house, and maybe out of the past. Based on That Was Then, This Is Dumb.

12. The Balmora Beat (single-chapter) - Follows the legionnaire Mack as he makes his rounds in Balmora.

13. All the News That's Fit to Primp - Quinn works on establishing The Fashion Club's reputation. After all, you can't go from club to guild unless people know about you! Not specifically based on any episode.

14. Raiders of the Lost Arkngthand - As fascinating as the ruined Dwemer city of Arkngthand is, the archeologists can't help bringing along the usual amount of corruption and stupidity. Not specifically based on any episode.

15. The Tell-Tale Art - After one of Jane's clients stiffs her on payment, she has to start looking for alternatives. And what seems too good to be true usually is. Takes inspiration from Art Burn and Life in the Past Lane.

17. The Horn Identity (single-chapter) - A brief look at Jeval (and Treads-on-Ferns).

18. Balmora Confidential - Daria's attempt to figure out Synda's plans lead her into the city's darkest corners. Though it takes a plot point from Ill, this story doesn't draw heavily from any episode.

19. The Salt in Our Stars (Single Chapter) - Sandi's still reeling from the events of Balmora Confidential when she meets Tom.

20. School of Mock - Helen gets a lucrative job offer from her old classmate, Erarik, which necessitates taking the rest of the family to the neighboring Imperial town of Caldera. The story draws from Camp Fear by introducing Amelia and Skip, though the school in Caldera is more patterned off of Grove Hills in Gifted.

21. The Summer of My Ashlander Nomad - Aware of how dangerous Morrowind can be, Daria makes an effort to teach herself magic. In so doing, she meets Ted. This story takes some inspiration from The New Kid.

22. Wizards Off the Coast - Still trying to learn magic, Daria takes up an offer made by an old acquaintance and goes to Sadrith Mora. Though not based on any episode, it does introduce Link from Is It Fall Yet?

23. Big Mer on Campus - Tom finally shows up in Daria's life. Readers familiar with the show start bracing for the worst. Not based on any specific episode, though has some similarities with Partner's Complaint.

24. The Wedding Wringer (Single Chapter) - A short fic dealing with Stacy's anxieties regarding her arranged marriage.

25. The Dark Arts - Tom finds a noble client for Jane, which creates a situation Daria isn't quite ready to handle. Not based on an episode.

26. Ashtrapped - A story involving a trip to Ald'ruhn that was started in 2018 and based off of Speedtrapped. The version finished in 2021 no longer has much in common with the source episode, and focuses on Daria, Mr. DeMartino, and their visit to the city of Ald'ruhn.

27. A Kiss to Build a Scream On - This continuity's version of the infamous Kiss--only it doesn't involve Jane at all!

28. A Comedy of Manors - Daria runs off with the Sloans to a luxurious manor in the Ascadian Isles in an attempt to escape the aftermath of the previous story. Needless to say, she fails. Not based on an episode, though it does take a few elements from Is It College Yet?

29. Gone Sister Gone - A brief look at how Quinn and her parents are faring in Daria's absence.

30. The Cantons of Vivec - Daria heads to Vivec to find Jane, and does--only to learn that Jane is struggling to set up her own life as an artist in the big city. The story has a few references to Is It Fall Yet?.

31. Bad Day in Balmora - Daria heads back home right in time for the Balmora Tax Revolt. The final regular episode.

32. A c0da to Live By - An epilogue that shows the fates of the various characters across the next 200 years of Tamrielic history.

Daria, Jane, and their families still keep the names they had on the show (though the Lane surname has been changed to Llayn). Others have been altered to better fit with the setting. It's generally pretty easy to figure out who is who. Some have roles rather different from their show counterparts. A partial list of divergences follows:

In addition to the cast from the show, a few recurring characters unique to the series have also been invented.

The first story, Outlanders, was Winner of Best Crossover in the 2018 Daria Fandom Awards

Retrieved from "https://dariawiki.org/w/index.php?title=Daria_In_Morrowind&oldid=29004"
Categories:
Cookies help us deliver our services. By using our services, you agree to our use of cookies.