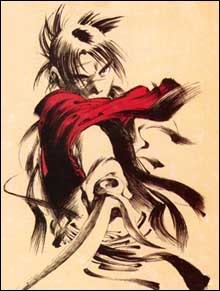 Dark Kuno was born and raised in the US state of Alabama.

Was an avid fan of MTV and remembers sneaking out of bed at midnight at the age of 5 to watch the channel's premier via satellite. As the channel grew ,his love for animation of all types naturally ensured his rabid dedication to everything put out by MTV Animation, especially Liquid Television. Liquid Television begot Beavis & Butt-head, which begot Daria. And the rest, as they say, is history.

As a fellow high school outcast, shunned and belittled for his intelligence, Daria struck a very strong cord in him. A random whim while on Fanfiction.net sent him to the Daria section of the site, where he dove into the cornucopia of fanwork there. An off-hand reference in an author's note led him to discover PPMB where he eventually posted his first work of fan fiction (in any fanon).

He spends his days (as he has for the past decade) answering calls as an Internet & Web page tech support rep for one company or the other, playing WoW, spending entirely too much time at PPMB and FF.Net, as well as writing & sketching.

Retrieved from "https://dariawiki.org/w/index.php?title=Dark_Kuno&oldid=27330"
Category:
Cookies help us deliver our services. By using our services, you agree to our use of cookies.