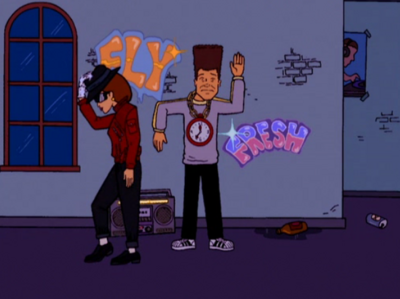 Jake and Helen being Totally Radical

As with any television show set in the "present day", there are specific elements that tend to limit the show to a certain chronological period. Daria is no exception, being firmly rooted in the period it aired, from early 1997 to early 2002.

For the most part, these are little details - such as cathode ray tube TVs and computers - but sometimes can be relevant to the plot or a character's backstory.

When characters are listening to music, it's almost always a piece from the mid-to-late 90s or early 00s. (The DVDs replace this with royalty-free stock music.)

Except for Helen, none of the characters uses a cell phone regularly, which are ubiquitous today. Aside from Helen's phone, only a few cell phones are seen in the series, the first in "The Teachings of Don Jake," and it is a very large bulky device unlike the cell phones of our era. Jake has a more modest cell phone in "Daria!", which he throws out of the car window before his song, "Gah Dammit!". In "Legends of the Mall," Quinn is using a more compact cell phone when Daria tells her that Jake can't pick the Fashion Club up at the mall. Similarly, Helen's large, bulky cell phone gets replaced by a sleeker version more in line with the current models ("One J at a Time"), and Quinn uses a modern cell phone in Is It College Yet?

Almost every stereo system you see has an audio cassette deck on it, which were hard to come outside a thrift store by 2005 with the rise of MP3s.

Almost all computers have cathode-ray monitors as opposed to the flat-screen monitors which were just starting out at the time. This also goes for televisions.

Helen and Jake are explicitly made out to be former hippies, and part of the late 1960s/early 1970s counterculture movement when they were teenagers and young graduates. The further into the past the show gets, the more dated this becomes.

Trent Lane and Mystik Spiral are parodies of alternative rock and grunge; in later years, they may have parodied a different style.

The local cyber-cafe was robbed, and O'Neill laments that now people are cut off from online contact. Even by the second season of the show, characters would be logging on from home and the Internet would become far more present. These days, a cafe would have wi-fi for laptops as standard rather than boast about being "cyber" - and from 2010 in parts of the United States, "Cyber Cafes" referred to vitual gambling establishments.

alt.lawndale.com is also a joking reference to New York's hip alt.coffee restaurant, which shut down in 2007.

The name "Mall of the Millennium": in the late 1990's, the terms "2000" and "millennium" were used as buzzwords to show something was trendy or impressive.

The building itself is a nod to the Mall of America, which is still around but was newly opened when "Malled" was made.

Brittany was forced to carry a beeper by Upchuck. She would carry a cell phone if the show was set in the modern era.

Jake mutters that he likes to think his military school classmates all died in the Vietnam War.

Helen says Jake went to "one of the most famous festivals of the decade" - Quinn thinks she means Woodstock (August 1969) but it was actually the Altamont Free Concert (December 1969). It's not just the concerts that date this, as the joke relies on most of the target audience knowing that Altamont was badly managed, chaotic and violent and is seen as the symbolic end of the hippie era.

Trent refers to the music video for "Everybody Hurts" by REM, which ran in 1993, during a scene that's a deliberate copy of the same video.

The contest is about Student Life at the Dawn of the New Millennium - which has since been and gone.

That Was Then, This Is Dumb[edit] 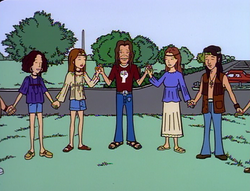 The hippies' attempt to levitate the Pentagon is a reference to a real-life "attempt" to do so, during an October 21 1967 anti-war march. (They don't appear to be at the actual protest though, which - based on their 1972 college graduation date in The Daria Database - occurred before Jake and Helen were students at Middleton College).

Jane, in trying to get Jesse's attention, states that on April 1, 2007, the various objects people buy would take over civilization. This date has since occurred.

Jake and Helen spent a night in jail at Boulder in August 1969.

Quinn carries a beeper in this episode.

Jake is confused about the comic strip "B.C." and its religious elements. The religious bits were dropped after the death of Johnny Hart, the original writer and cartoonist for "B.C.," in April 2007.

Jake rants that his father wouldn't get him a G.I. Joe because it was a "doll". ("It was an action figure!") The first G.I. Joe, which pioneered the term "action figure", came out in 1964.

Quinn thinks they'll be back in time for Buffy the Vampire Slayer, which ended in 2003.

The disk drive Mr. O'Neil is using to display the class's multimedia assignments looks like an Iomega Zip Drive, a replacement for disk drives that eventually dropped off in popularity due to inexpensive CD-RW technology. The zip drive could hold over 100 megabytes, which makes sense - the 30 seconds of music Daria and Jane wanted Trent would have almost completely filled a single one-megabyte floppy disk, no matter what format it was recorded in.

A 24 Hour Photo store and a Lackluster Video are seen on Lawndale's main street. In the mid 2000's, photo developing stores faded away with the rise of digital cameras while video rentals were overtaken by DVD home delivery rentals and online streaming video.

Daria suggests Brittany can talk about the Taliban's draconian rule in Afghanistan. By the end of 2001, the Taliban had been deposed. However, they retook control of Afghanistan in 2021, so Daria's comment has, unfortunately, gone back to being timely...

Arno says he missed a chance to be the first to balloon around the world. The deed was done in 1999, the year before this episode aired.

Another beeper reference, this time when Quinn protests "I'm not my sister's beeper!".

Daniel Dotson created Paper Plate Genocide in 1991. In the film, aired in 2000, he seems to be in his thirties.

Alison is the first and only character that isn't heterosexual to appear on the show. This is less likely to happen on a teen-oriented show these days.

As part of a joke on school supplies, Chechnya can't be found on the History class map because it was printed before Chechnya became independent in 1991. This meant the map was over ten years old. This is a two-fer: not only is the map getting older and older, Chechnya ceased to be independent in May 2000 and Jodie appears to be talking about the recent aftermath of the Second Chechen War.

The Buzzdome 'B' story makes the most sense if it occurs before the tech stock bubble burst in spring-to-summer 2000. Amusingly, this story came out after the bubble had burst so this story was dated when it aired!

Jake doesn't understand the most basic things about computers or the Internet because he's old. The further we go into the future, the more he'd have been required to use a computer and the Internet for work.

To start Sandi's exercise program to lose weight, Quinn inserts a VHS videotape into the player in Sandi's room.

The plot revolves around Daria sending a short story to Musings, a literary magazine with some prominence. There aren't many magazines that run short stories still in existence circa 2011 and the ones that do would not be known to the general public.

An angry Jake says the Vietnam War was "winding down" when he was eligible for the draft.

The film opens with a montage of iconic moments and fashions of 20th century American colleges. The montage ends with the late 80s, whereas even a few years later the show would've had the grunge period of the early 90s.

The September 11, 2001 terrorist attacks had a massive influence on the States which was still being felt in early 2002, but they happened after this script was written so nobody in Lawndale has noticed.

At Lindy's party is a poster for "Cyber Doo 2001 Film and Multimedia".

Jodie's grandmother was one of the first female students to be accepted into Turner, a historically African-American university. Her father (a 50 year old man) says he "had to" go to Turner instead of a more elite university, implying that as a black man he couldn't get in to the more elite universities. The further ahead we get from 2002, the less likely it is that Grandma Landon would've been one of the first female students and the more likely it is that Andrew would've had other opportunities.

In the "future egos" the Three Js are shown running JRL, a parody of MTV's Total Request Live - a show that was cancelled a few years after the movie aired.

Jake won't be drafted into the Vietnam War because he's going to Middleton College.

Upchuck's website Ultrasuave Universe lists Agent Scully, Teri Hatcher from The New Adventures of Superman, and Aeon Flux in his Gallery of Feisty Babes. These are all actresses and characters from sci-fi shows from the 1990s.

Anthony DeMartino used to be a beatnik.

The "Middleton Musings" state that Jake and Helen are from the class of 1972 and recently celebrated their 23rd wedding anniversary (which would be June 26, 1998).

Kevin and Brittany are clearly amazed by the very concept of email.

The brochure for Jim's Paintballing Jungle has a themed arena based on the Bosnian Wars and another based on Iraq, which refers to Saddam Hussain and the Clinton-era bombings of Iraq.

Angela Li wrote a letter to Texas Governor George W. Bush, praising his views on capital punishment (controversial in the late 1990s) and hoping he tries to become the Republicans' candidate for the 2000 election.

The Morgendorffers' fridge still has a "Vote Dukakis" bumper sticker stuck on it, a candidate who ran in 1988.

Trent has a portable CD player under his bed which broke in 1994.

Lawndale High is burying a time capsule of the year 1998.

The World According to Daria[edit]

Butt-head says they'll be as cool as the American Gladiators in "Babes 'R' Us", a show that ended in 1996.

"Citizen Butt-head" has Daria and B&B meeting President Bill Clinton, soon after he was elected; Daria refers to a campaign promise he made. He was in his second term when Daria started and left office a few months after Is It Fall Yet?.

Coach Buzzcut was a Vietnam War veteran and has a flashback in front of Daria in #21 of the comic.

Highland High buries a time capsule of the mid-1990s in the final issue. (Daria didn't think much of the idea that time around either)