A shared world science fiction setting for Daria fanfiction. Daylight was created and placed online in October 2008, open for any fanfic writers to use as they pleased. The only "rule" was that no one was allowed to write a boring story. The "bible" main page was on Dariaverse.com, though backup pages are available here.

For unknown reasons and with little warning, the Sun destabilizes and becomes highly eruptive and moderately hotter for a relatively short period of time (several decades minimum, though at the writer's option it can last up to a millennium). This has profound consequences for human civilization, to say nothing of the rest of Earth's biosphere. The disaster unfolds in logical stages over time, throwing down new challenges at a rapid pace on top of the old. The actual event that began the Daylight Crisis (including the first Coronal Mass Ejection impacts against Earth's magnetosphere and the initial catastrophe that followed) is called Zero Hour.

The idea for Daylight came from numerous sources, the main one being Larry Niven's award-winning short story, "Inconstant Moon", plus parts of J.G. Ballard's "The Drowned World". An excellent source of additional nonfiction material on this topic can be found in Dr. Philip Plait's "Death from the Skies!" in chapter two, "Sunburn," but the solar eruptions in this story setting were meant to be far more powerful and longer lasting than those described in Dr. Plait's book.

In July 2014, NASA reported that if a July 2012 CME had occurred one week earlier, the result would have been similar to the Daylight scenario. Good thing it didn't, eh readers? 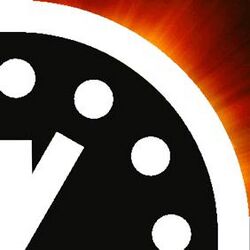 The reverse-Doomsday Clock image also used for the Daylight setting; it represents the post-Zero Hour world and the solar events that caused the crisis

Reading old fics on PPMB may require the "Rosetta Stone" due to coding issues.

External Links on the Series[edit]

Retrieved from "https://dariawiki.org/w/index.php?title=Daylight&oldid=27437"
Categories:
Cookies help us deliver our services. By using our services, you agree to our use of cookies.