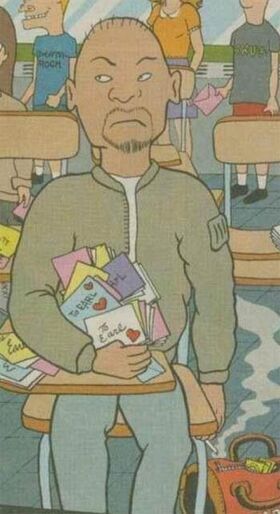 In "Incognito", Beavis and Butt-head accidentally knocked a cigarette from his hands and he indicated he'd be taking violent revenge on them. The next day, they tried to hide from him with appallingly crap disguises. However, the class was then interrupted by shooting from outside; Mr. Van Driessen sternly asked Earl if he'd fired the shot, and the angry youth denied this and challenged him to run a ballistics check. Daria then pointed out the shooter outside, and Earl returned fire to cheers from the class. "Mister Van Driessen don't like people interrupting when he's diagramming photosynthesis!" He told Beavis and Butt-head that he was going to let them live after they backed up his alibi to Van Driessen, but he had to hand in his gun for disrupting class (he'd get it back at the end of the term), which caused the thug to tearfully apologise.

Two things are notable with Earl:

In the comics, Earl is a member of Todd's gang - making him a serious career criminal with connections - and enjoys beating up Beavis and Butt-head. In "Time Cap", Van Driessen again manages Earl, gently convincing him to leave something in a time capsule for future generations (he leaves a brick he intended to throw, reasoning with his teacher that he could just throw another brick); Van Driessen initially asked if Earl wanted to leave one of his switchblades, which he didn't.

In Beavis and Butt-head Do America, we hear a man called "Earl" is fixing arms smuggler Muddy Grimes up with hitmen. Was it the same Earl...?

Fandom has used Earl as someone Daria has an unlikely connection too, working off how casual they seem with each other in "Incognito". (Sometimes this leads to shipping because of course it does)

He appears most prominently in:

He only appears in a single episode after "Incognito", which has rarely been repeated and never put on video due to having a school shootout. However, Earl appears irregularly in the comics where he's part of Todd's gang.

Retrieved from "https://dariawiki.org/w/index.php?title=Earl&oldid=28677"
Category:
Cookies help us deliver our services. By using our services, you agree to our use of cookies.